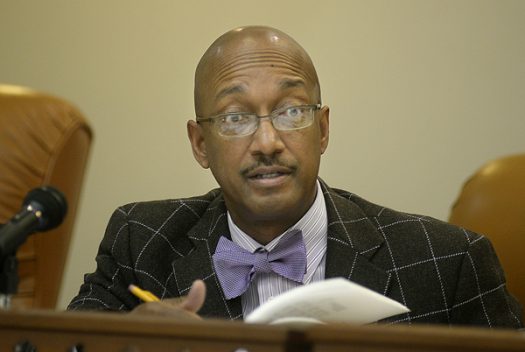 NATCHEZ — An Adams County Supervisor’s frustration with a former county engineer was building at Monday’s meeting regarding the Morgantown Road project.

The highly traveled, dangerously narrow and flood-prone road has been a topic of concern for public officials and Adams County residents for more than a decade.

Last month’s board meeting became heated at the news that the county was short over $2 million to widen and repave the road and dig necessary drainage.

“I’m disappointed that we’ve been fighting for Morgantown this long and our other engineers knew that $2.4 million wasn’t going to be enough to complete half of Morgantown Road and haven’t said anything about it,” Supervisor Ricky Gray said, referring to former county engineers Jordan Kaiser & Sessions.

The bipartisan spending plan which President Joe Biden signed into law in March includes $2.4 million for the Morgantown Road resurfacing project, which the county’s engineering firm IMS Engineers said could cost $4.5 million after inflation and engineering costs are factored in.

Hayden Kaiser of JKS said the last estimate he presented to supervisors in May 2020 was approximately $3.26 million, which didn’t include “engineering and other related costs.”

Natchez and Adams County officials jointly requested the $2.4 million from Congress in their lobbying efforts. However, the project had been redesigned multiple times and the estimated cost continued to increase each time, Gray said Monday.

“When we go to Washington D.C. to lobby for projects, I don’t make these numbers up myself. I take what they give me,” he said. “Morgantown started as $1.2 million and then went to one point seven to three point whatever. By then, we had already lobbied. When you give me documents that say $2.4 million and then the project changes to $3.2 million then somebody needs to communicate that to someone and let them know.”

Gray said JKS was to blame for the project being redesigned multiple times.

“It changed three or four times because the first time they did it wrong,” he said. “They had markers in people’s living rooms. They added three lanes and anyone with common sense knows that Morgantown can’t hold three lanes without taking all of the people’s property. If anyone owes someone an apology, he owes the citizens of Adams County an apology because we’ve got to keep funding something they should’ve gotten right the first time.”

Officials also said last month that JKS hadn’t given IMS electronic designs of the Morgantown Road project, which they needed.

In an email Kaiser sent to all of the supervisors, county attorney Scott Slover and The Democrat on April 20, Kaiser said he would hold electronic designs of Morgantown Road from the county as “intellectual property” until JKS is paid over $300,000 owed for past work. However, county officials said they were up to date on all of their invoices from JKS.

Kaiser also demanded a public apology from officials, specifically Gray, for comments directed at JKS during last month’s board meeting.

“I am willing to work with the Board, but I suggest they get their facts straight before making public statements lambasting JKS, and for that, I expect a public apology,” the email states.

Gray said Monday that he wouldn’t apologize to Kaiser.

“I don’t mean no harm. I try to be as open, honest and fair as I can be,” he said. “I don’t owe anyone an apology because I didn’t do anything wrong.”

Gray added if Kaiser had issues with receiving payments from the county, he should have come to the board meetings.

“In my six years, he has been to seven or eight meetings,” he said. “We’ve got all these problems and yet, where is he at?”

Kaiser did not answer phone calls and messages for comment.