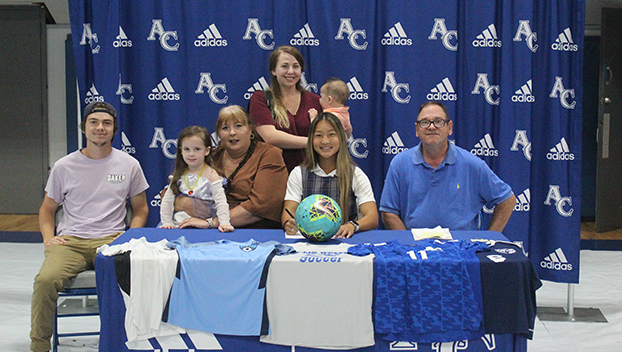 AC senior Madi Cooley signs with Co-Lin soccer. She would like to play midfield at the school but is willing to play anywhere. Her original plan was to go to Meridian but Co-Lin was a lot closer to home. Back row, Taylor Cooley and her son. Front row from left, Nolan Owens, Hilary Cooley, Taylor’s daughter, Madi Cooley and Hank Cooley. (Hunter Cloud | The Natchez Democrat)

NATCHEZ — AC students gathered in the gym to celebrate the year’s athletic awards Thursday morning, but senior Madi Cooley was there for an additional reason. With her family and boyfriend, she signed with Co-Lin to play soccer.

Her plan was to go to Meridian Community College. It was something she shared on two occasions for stories. However, Co-Lin in Wesson is about two hours closer to home.

Cooley will study biology to work towards becoming a veterinarian. She isn’t sure when practice will begin with the team, but it might be in July.

A midfielder at AC, she would like to continue playing the position at Co-Lin but is willing to play wherever she can get playing time. Cooley said she doesn’t feel as nervous about going to Co-Lin as she would have been about Meridian. Graduation is only 15 days away for the senior.

“I’m glad to move on with my life,” Cooley said. “I love high school. I’m not sure if I’m ready to leave everything behind.”

‘We are just beginning’: Advocates speak out on Supreme…