‘I can do it my way,’ Cathedral STAR Student driven to succeed 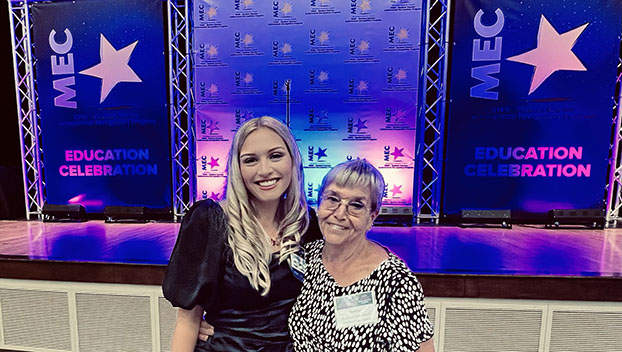 The STAR Student honor goes to the senior student with the highest ACT score from each Mississippi School participating in the program. It’s the student’s job to select a STAR Teacher who helped them achieve academic success.

The ACT exam is a standardized test used for most college admissions in the U.S. The highest score possible is 36 and Drane’s highest score is 32.

For the STAR Teacher, Drane chose the teacher who she has known the longest, she said.

Drane said she was convinced at three that she could swim without using her arms and only using her legs.

“‘I can do it my way,'” Lanehart said, quoting three-year-old Drane. “That’s the way she was in fifth through eighth grade. She said ‘I can get it done, but I’m going to do it my way.’ She has always kept me on my toes,” Lanehart said of Drane. “She questions everything and then I would have to go and question other things. She has a very inquisitive mind and always wants to do her best. If I told the kids ‘you can’t do this’ she would show me exactly how she could do it. She is always driven.”

Lanehart also taught Drane math, science and English in the fifth through eighth grade, starting at the former Trinity Episcopal School, which permanently closed after 2018.

This marks Lanehart’s 43rd year of teaching, including 28 years of teaching at public schools and 14 years at Trinity. Lanehart came out of retirement this school year to teach Algebra at Cathedral.

“I love teaching. I’m just not ready to go home,” Lanehart said. “I like to see people succeed like Drane. Lots of my students succeed and I hope it’s a little bit because of me.”

Drane says she chose Lanehart to be the STAR Teacher because she helped mold her from a young age to be a good student.

“Every time I think of a good teacher, it has always been Mrs. Lane Lanehart because, like she said, even though it would question her a lot she would always make sure to get back to me with an answer,” Drane said. “She has always taught me to be driven and to get my work done. She has been the teacher that has cared the most. Even after Trinity closed, she would always check in on us Trinity people. She has made relationships with her students and cares for us.”

Drane also works as a lifeguard and teaches swimming lessons herself. Her other hobbies include painting and scuba diving.

She has earned a total of $351,000 in scholarships and is ranked No. 1 in her class with only a few weeks left until graduation.

After graduation, Drane plans to enter the Public Policy Leadership program through the University of Mississippi on the pre-med track and minor in art.

She is the daughter of Dr. Kenneth Drane and Cindy Drane.

‘We are just beginning’: Advocates speak out on Supreme…