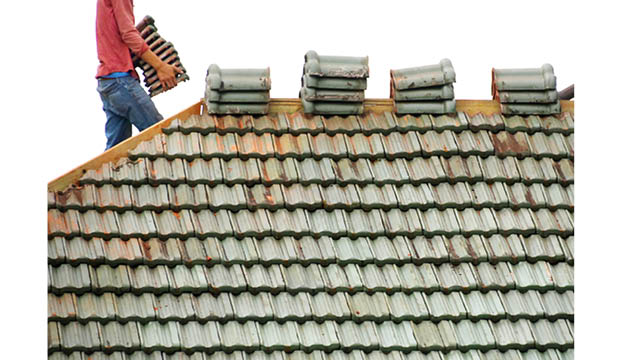 Workers from Cribbs Roofing and Sheet Metal of Baton Rouge replace the roof on the Shelter House at the Natchez City Cemetery. Funds for the approximately $25,000 project were raised primarily at the cemetery’s 200th birthday celebration Gala Under the Oaks. (Ben Hillyer | The Natchez Democrat)

NATCHEZ — Work is wrapping up later this week on the replacement of the roof on the Shelter House building at the Natchez City Cemetery.

Funds for the $25,000 project were raised at the recent Gala Under the Oaks, which celebrated the cemetery’s 200th birthday.

“The cemetery board started looking into replacing the roof about seven years ago,” said Liz Dantone, a retired architect and member of the cemetery’s board. “It’s kind of a unique roof to the age of the structure and we found a roofing company recommended by the Historic Natchez Foundation — Cribbs of Baton Rouge, Louisiana — that specializes in historic tile roofs. They do a lot of work on the LSU campus and other religious buildings with tile roofs in that area.”

She said the job was put on hold because the cemetery board needed to raise more money to pay for the project.

“We dedicated the funds from the gala to go to replace the roof. Before the gala, I reached out to the roofing company and we were able to do the background work we needed so the project could get started,” Dantone said.

The building has a French tile-style roof, which is a clay tile with glazing on all the outside surfaces. Through the years when needed on the roof of the building, the green glazed tiles were replaced with non-glazed red tiles.

“So it kind of looked like missing teeth on the roof,” she said.

Some of the building’s original green French tiles were reusable.

“What we could reuse were cleaned and set aside and are being reused. We knew we needed to obtain additional tiles, but they were no longer being manufactured. The roofer had to find salvage matching tiles from all over the country,” Dantone said. “They will all be glazed green, and they are not going to leak!”

The cemetery board plans to do a number of other improvements to the building, “but we want to do them in bitable chunks,” she said.

“The building has to have electrical and plumbing upgrades. It does not have central air or heat and climate control in a historic building is important to the preservation of the building,” she said. “It is our working office. It also lacks hot water. We need to bring the building up to a modern, functioning building, but do so in a way that helps its long-term preservation with the least amount of impact on its interior.

“Our philosophy in the staging of these improvements was we have to stop the water intrusion first. Then, we will work on the building systems and lastly the things that are more about finishing the aesthetics. Those three phases would result in a shelter house restored and preserved as a historic building,” Dantone said.

For more information about the cemetery and its ongoing projects, and to learn how you can help, please see natchez.ms.us/150/Cemetery.

‘I can do it my way,’ Cathedral STAR Student…