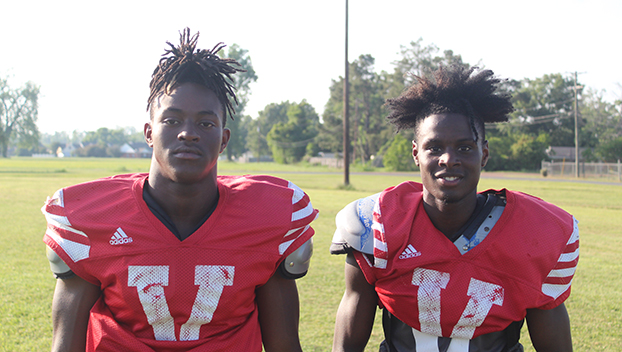 Vidalia football players Jalin Moody and Chris Brooks will take a break from spring football to compete at the LHSAA Class 2A State Meet Friday. The meet will be held at Louisiana State University. Left, Jalin Moody took first place in the 100m and 200m dash at the regional meet on April 26. Right, Chris Brooks will compete in the high jump after finishing third at the regional meet. He will look to best his height of 5 feet 10.25 inches from regionals. (Hunter Cloud | The Natchez Democrat)

VIDALIA — Viking football players Jalin Moody and Chris Brooks will take a break from spring football Friday to run in the LHSAA Class 2A State Meet. They are excited about the opportunity.

He was placed under no contact at football practice Wednesday. “It would be a bad day for them to twist an ankle,” head football coach Mike Norris said.

They are the only Vikings running at state, but it is an accomplishment they made it that far. Vidalia has no track, so they practice on the football field. Track Head Coach Kale Davis said this season was the first year they really could have track since COVID-19 shut things down.

“We started from the ground floor. It is a pretty big feat to send them to state,” he said. “Some days, we get to go to Natchez High and practice. For the most part, we get it done at Dee Faircloth Stadium.”

Moody said this year is his first year running track. He just showed up to practice and gave it a try. Now, he has two chances to bring home a state championship. He said it is a lot of pressure, but he does not feel it.

The first meet he realized he could run at lightning speed was their meet held at Buckeye on April 1, 2022. He won his race, which gave him confidence.

“My motivation is to bring home a state championship,” he said. “It is relaxing knowing we will get the experience to compete at LSU. No matter what place I am in, I keep going and try my best. It just so happens I have the fastest time in 2A. It took a lot of hard work, and now we are here.”

Moody said he turns off any music before running and gets into his head. He relies on his confidence to get psyched up for a race.

His teammate Brooks plays basketball where he goes all out on the court and routinely went flying down the court in hustle plays and had some of the best hops on the team.

Basketball’s practices required running, jumping, and rebounding drills which made his legs strong. This year is his first year competing in track. Coach Davis asked him if he would jump because the team needed a jumper, and he obliged.

On his run-up, he paces his first couple of steps. As he approaches the pole, he increases his speed and takes off to gain all his momentum and jumps. It is just a slow to fast motion, he said. There is no jumping pit at Vidalia, so he will go across the river to Natchez High School and practice there.

He is ready for Friday’s competition and jumps at about 1:45 p.m. Mentally, he prepares himself for the competition on the trip.

“We want to compete every time we go out there. We want to stay confident. We have to bring it home and finish it,” Brooks said. “On the way to meets, I try to stay within myself. I don’t surround myself with too much noise. I try to stay focused.”