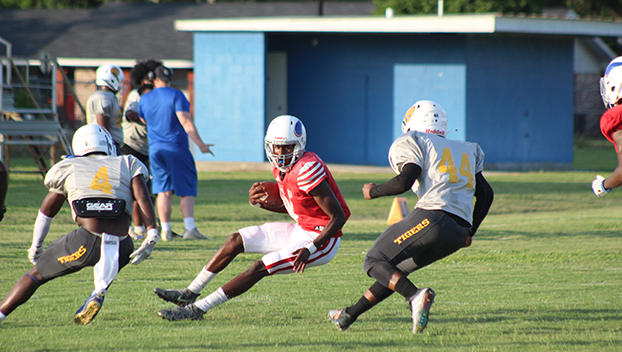 Vidalia Viking quarterback Sema'J Hayes had a touchdown run and a two point conversion on a pass in the Viking's spring game. They tied East Feliciana 8-8 Saturday. (Hunter Cloud | The Natchez Democrat)

VIDALIA — Fans packed the bleachers at Dee Faircloth stadium and shoulder pads popped at the Viking spring game Saturday. East Feliciana visited Vidalia to compete in scrimmages and a timed half of football.

It was an exciting day for junior Sema’J Hayes, who will be a senior this fall. The quarterback rushed up the middle for a three-yard touchdown run and completed a slant pass to add a two-point conversion as the Vikings tied 8-8.

He commanded the pocket and ran around the field creating opportunities for his team. Overall, he felt good about the spring game. Vidalia’s atmosphere was much better than last year. There was a change from the previous season.

“I’ve been maturing. Everyone has done that,” Hayes said. “We got better and held ourselves accountable heading into this. We want to have a winning season and go to the dome. We have to all work hard to get there. Everyone has done a good job this spring. If we can stay on this path we will be there in the dome.”

Head Coach Mike Norris said all he wanted to see from his team in the spring game was effort. Chris Brooks made an effort play at the start of the half of football by making an interception on East Feliciana’s first play from scrimmage. It set up their scoring drive. On the touchdown they gave up, the Viking’s defender covered his receiver well but couldn’t find the ball.

Norris said he saw much better effort Saturday night than what he saw last year. The Vikings flew to the ball and didn’t get their heads hanging. They didn’t get into arguments on the field. Moving forward, the Vikings will work on competition and cleaning up any mistakes.

“We try to compete even if it is something small like a race with a lineman. We want them to learn how to compete,” Norris said. “Our hope is to have confident kids. They play fast and fast kids win football games. A confident kid on the football field is super fast because they don’t have any hesitation.”