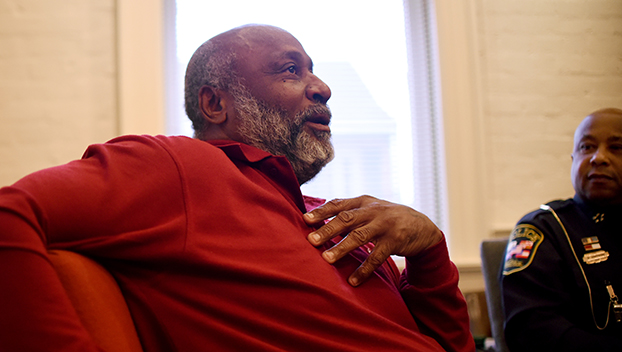 A plan presented to the school board last week suggests closing the deteriorating Joseph L. Frazier Elementary School and temporarily putting high schoolers at Robert Lewis Magnet School until the new high school is finished. However, the consensus of the Board of Trustees members is they didn’t want to see any vacant buildings once that transition is made.

“I’m not in favor of closing those schools completely down,” Frazier said, adding he feels at least one of the schools, Robert Lewis, should remain open as a public school to keep neighborhood students from having to commute to the opposite end of town.

His main concern, however, is the potential vacancy of the buildings.

“That happened to the Thompson school and look at it now,” he said. “We need to keep it open for some kind of purpose. Closing it down and just having security there isn’t an option. We need to get together as a community and figure out what we can do. … I think Robert Lewis could still be used as a school. … North Natchez just doesn’t have anything and if you close the schools, that whole neighborhood is going down.”

They would be temporarily placed at the current Robert Lewis Magnet School until the new high school is finished. Once students move to the new high school, Robert Lewis Magnet School would be maintained for other use, such as a meeting location for emergency evacuations. The Ombudsman alternative school would also be relocated to the current Natchez Freshman Academy.

When this plan was introduced, some board members inquired about repurposing one of the schools as a “School for the Arts.”

Joyce Arceneaux Mathis, former Alderwoman Ward 1 and president of the NAACP’s Natchez chapter, said the NAACP presented a proposal to the Adams County Board of Supervisors, Natchez Board of Aldermen and NASD suggesting that the schools house skills classes that train young adults for careers.

“We did not want any schools to be closed and we’re in hopes that as soon as they were getting ready to move schools that there would already be a plan,” she said. “If they weren’t going to be used for students in the capacity that they had been used, then we want the city, the county or the school district to use them for the job training and teaching the skills that are necessary for people to be hired.”

Mathis said vacating the buildings entirely is “not going to work.”

“Those buildings would become another avenue for crime,” she said. “The community is going to have to speak up. … It’s just dangerous having buildings open that no one is utilizing. We want to know what the plan is. We’ve made a presentation of suggestions and we specifically talked about those buildings. … Find and locate grants, find the needs for skills that people could acquire and utilize the buildings for that purpose.”