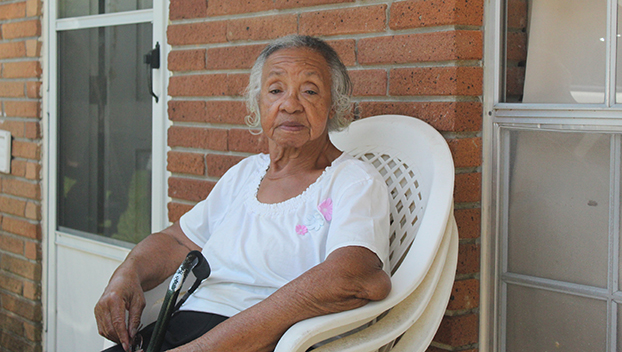 Victoria L. Fleming is an ordained minister. She was sitting outside her daughter’s home on Espero Drive close to where The Dart landed Friday morning. Born in 1936, she has lived a life on a mission. (Hunter Cloud | The Natchez Democrat)

NATCHEZ — Victoria L. Fleming sat in a white lawn chair outside her daughter’s house on Espero Drive where The Dart landed Friday.

A Natchez native, Fleming said some people don’t like where they were born and want to get away, but not her.. Her career as a traveling nurse took her around the country, and she has been able to visit big cities.

Big cities aren’t for her, she said. People there don’t have the time to thank God for what they have. In Natchez, she can step back and thank God for all she has.

“I was born in 1936. I’m 86, and I’m proud of it,” Fleming said. “When you love, it is just like you are putting on a glow of God. I have never had meanness in me despite the meanness surrounding me as I grew up.”

Her childhood home was on New Street. It started as a shell of a home that her father built in a week after moving to .Natchez from Chicago. For many years her family worked to expand the home..

She said the neighborhood grew a Victory Garden during World War 2. The community worked together to grow vegetables by cultivating the ground and helping any way they could. She helped by pulling weeds.

She has worked as a house cleaner, a house sitter, a babysitter and a nurse. As a nurse she would travel from town to town and county to county.

“It was hard work, but I loved it. Sometimes they didn’t have sheets or any supplies in the country,” Fleming said. “Thank God I knew how to chop wood. Sometimes we would have to pick up wood along the road to help those who needed it. We would bathe people and cook them meals. I would talk to them about the Lord. I had a clipboard in my car with a prayer, and I would read it, and I would say a prayer as I walked into the home.”

An ordained minister, she spends a lot of time in God’s word. Fleming has the ability to recall verses from scripture. Like Jonah, she didn’t want to become a minister at first.

“Everything is beautiful, even what we are going through. I praise God for all he has done,” Fleming said. “We all have a mission on this earth. Don’t fret and let stress get to you. The world is beautiful because he made it.”