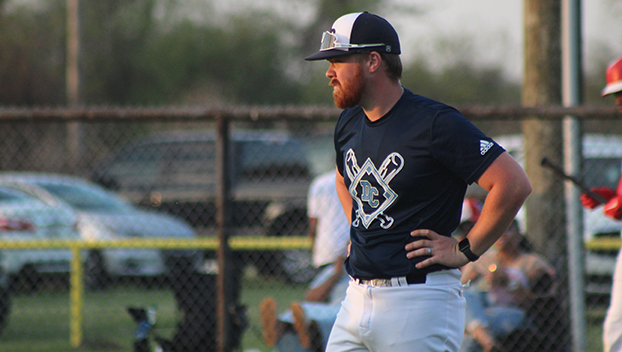 Delta Charter head coach Nic Kennedy led his team to the third round of the LHSAA playoffs in his first year with the program. His squad grew over the season and he said he is proud of them. Delta Charter lost 10-0 to Grand Lake Friday ending their playoff run.(Hunter Cloud | The Natchez Democrat)

LAKE CHARLES, La. — Delta Charter School head baseball coach Nic Kennedy knew his team had to play its best game of the season if it had any chance of upsetting No. 1 seed Grand Lake High School in the LHSAA Class 1A Quarterfinals last Friday afternoon.

Unfortunately, No. 8 Delta Charter ran into a buzzsaw on the mound in junior pitcher Garrett Walker as he struck out 10 batters and gave up just three hits as the Hornets went on to defeat the Storm 10-0 in just five innings to advance to the semifinals.

“They’re the true No. 1 seed. They’re an all-around great team. Zero errors. Their pitching was phenomenal,” Kennedy said. “They were a good team and at the end, they had zero errors and we had five. If we cut down on the errors, I felt like we had a chance to win.”

Keith lasted just two and two-thirds innings and gave up seven runs, five of them earned, on six hits with three strikeouts and four walks.

The Hornets scored six runs in the bottom of the third, which included a solo home run by Grant Trahan. Their other eight base hits were all singles. Gavin Walker led them at the plate by going 3-for-3 while Garrett Walker went 2-for-3.

Grand Lake scored two runs in the bottom of the fifth inning to run-rule Delta Charter and put an end to the Storm’s postseason run.

“Sometimes you run into a team that’s really good, and that’s what we did,” Kennedy said. “We just made a few mental errors and that cost us in the end. They’re a very respectable team. They were just that good.”

Preston Higgins came on in relief and gave up three runs, two of them earned, on three hits with three strikeouts and four walks over two and one-third innings.

Higgins, Davis Cooper, and Lawson Reyes each went 1-for-2 at the plate for the Storm.

“It sucks to lose. It’s never fun. I’m extremely proud of how far we came,” Kennedy said. “To come how far we came and play a great program in Grand Lake, I’ll take that. Nobody expected us to get this far. I look forward to our future. The three seniors, I hate how it ended for them. But there’s nothing to hand their hats on. Overall, I’m extremely proud of the effort they gave throughout the season and in this game.”

Delta Charter finished with an overall record of 12-12.