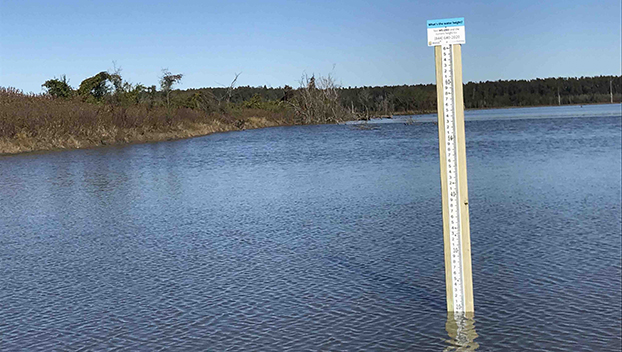 People can help the CrowdHydrology project’s research by sending in measurements from gauges. It will help NASA calibrate satellites in order to measure water levels under a tree canopy.. This is one of the gauges found at St. Catherine Creek National Wildlife Refuge. It is located near the boat launch at Butler Lake in the Butler Lake Unit. There are three other gauges in the NWR but those can be found in the Sibley Unit. (Submitted Photo)

Christopher Lowry, a geologist at the University of Buffalo, is working on a research project with St. Catherine Creek National Wildlife Refuge and NASA to measure flooding under tree canopies. To calibrate the new system, people need to record the ground measurements using rulers placed at Lake. St. Bruin, St. Catherine Creek NWR and Tensas NWR.

Cinzia Zuffada, a Chief Deputy Scientist from the NASA Jet Propulsion Laboratory, said it’s an opportunity for people to be citizen scientists.

“We are giving the public the opportunity as they walk and come in contact with the gauges,” Zuffada said. “If they can provide us with the supporting data, we can use it to validate our work from satellites. It is valuable. It is a way for kids to learn what is going on in their environment.”

St. Catherine Creek has tree cover making it hard to see the flooding. It is the perfect place to get answers needed by the research team to ensure the satellites are mapping flooding correctly.

Most of St. Catherine Creek NWR is closed to public use because of flooding. The gauge found at Magnolia Trail is accessible because it is in the Upland portion of the refuge. The goal is to create hazard maps of flooding at the refuge. It’s easy to make those maps in Arizona, where there aren’t many trees, he said.

Mississippi’s vegetation means scientists must use a different scanning method for water from regular optical satellite lenses. Zuffada said these satellites utilize signal waves to measure and detect water or ground on the surface. Satellites are constantly receiving data about what is at the surface.

These same signal waves can penetrate the tree canopy and thick vegetation and bounce up to the satellites to indicate if there is water or not. She said they could look at the properties of the signals to determine what is on the surface.

“In some cases, we can measure the depth of the water, but we are mostly looking for surface water,” Zuffada said. “We are looking for the extent of inundation and the inundation over time. The extent is the first question we are asking. Where is the water, and can we measure the flooding as it happens. Sometimes those events are so sudden they are in areas where you might not have the means of seeing them. It is the beauty of the satellite systems. You can see it as it is happening.”

Data is stored in the satellites before being sent down to receivers on the ground every couple of days. Satellites can not communicate the data to the ground constantly because the communication is expensive, she said.

NASA’s data can not be validated if people are not sending in gauge measurements. It is needed to compare what they see from satellites and what is on the ground.

There are four gauges at St. Catherine Creek National Wildlife Refuge. One gauge is in the Butler Unit at the Butler Lake boat ramp, and three gauges are in the Sibley Unit. One of these can be found in “The Swamp,” one is near the boat launch at Gilliard Lake, and the other is near the impoundment located at the end of the Magnolia Trail.

Gauges were placed in NWR and State Parks because they needed to be somewhere people could access them, Lowry said.

“ It is much easier to put gauges in on public land as opposed to putting it on someone’s property,” he said. “We have put them close to boat docks. We put them in popular locations. Our hope is people will be able to see them…If we can measure this flooding we can have better predictions of flooding and be able to warn people faster.”