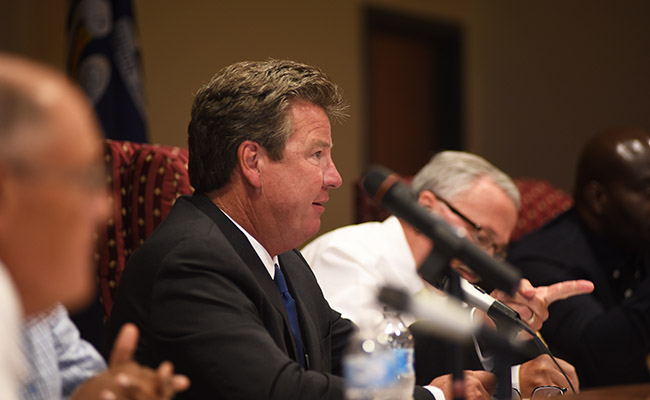 VIDALIA, La.— Three out of five members of the Vidalia Board of Aldermen voted to appoint Jon Betts as Mayor Pro Tempore for the town, a title which previously belonged to District 2 Alderman Robert Gardner Jr.

A Mayor Pro Tempore’s duty is to act as mayor in the event the mayor can’t attend a meeting or is unavailable to handle mayoral duties, in which case the mayor pro tempore is given all of the powers of a mayor.

This decision comes one week after Gardner pled no contest to a misdemeanor charge of theft in the Seventh Judicial District of Concordia Parish.

The charge stemmed from Gardner taking metered envelopes with the Town of Vidalia’s information printed on them to mail ballots during the 2020 election. The town’s information had reportedly been “whited out.” Gardner was sentenced by Seventh Judicial District Judge Kathy Johnson to one year of supervised probation. He will also have to pay a $500 fine, $260 in court costs and a probation fee of $40 per month or a one-time probation fee of $480.

Members of the audience of Tuesday night’s meeting of the Mayor and Board of Aldermen questioned whether the issue of removing Gardner as Mayor Pro Tempore was brought up because of his race. Betts is white and Gardner is Black. However, the aldermen’s votes on the issue were not divided by race.

Alderman Brent Smith, Rosa Demby and Jon Betts voted in favor of Betts’ appointment while Aldermen Gardner and Tommy Probst voted against it. Smith and Probst are both white and Demby is Black.

Before voting, Demby said she is voting yes, “not because I feel that Robert is not capable of running the town,” but because she had promised Betts that she would vote for him as Mayor Pro Tempore.

Smith said he requested to have the replacement of Gardner as mayor pro tempore added to the agenda of Tuesday’s meeting.

“It’s not anything against Robert. I’m not asking him to step down as an Alderman or anything,” Smith said. “This has been a concern of mine ever since COVID hit. If Buz was to go down … who up here is more fit or qualified to run the town? That is what this is about. We want the best representation that we can put out there. I’m not going into what Robert went through, but it demonstrated that he might not be who we need to represent the town.”

Smith said he felt Betts was more qualified for the job.

“When I look on this board, Jon (Betts) has been around for 20-something years. I feel like he could step in and run the town if need be,” Smith said.

Linda V. Bell of Alexandria, La. said her mother is a current resident of Gardner’s District and she drove for nearly an hour and a half to attend Tuesday’s meeting and speak for her.

“On behalf of my mother, I’m here to support (Gardner) as being mayor pro tem because he has done more for District 2, which she lives in than any past Alderman,” Bell said. “He has done his best to get this pumping station for the slough. I don’t know if you all know that it floods. I have lived there. I left Vidalia 30 plus years ago and things have not changed. … To bring this up now, someone has an agenda.”

Bell addressed her next comment to Gardner, “You stand firm. Stand up for your beliefs, for no weapon formed against you will prosper. Every tongue that rises up against you, you will refute it. That is the inheritance of the Lord.”

Thomansina Gaines, a Vidalia resident, said she thought Gardner was supposed to serve in that position for a year before aldermen vote on it.

Vidalia Mayor Buz Craft said there is no term for the mayor pro tempore, but it can be added to the agenda of any meeting if an alderman requests it.

“It seems as if there’s an agenda behind this situation and I guess maybe it’s me being a member of the NAACP kicking in. I don’t know, but I’m just curious if this was a little black and white, was this a gray area or what is really happening,” Gaines said.

“I take offense,” Craft said. “It has nothing to do with Black and white. This town is not a racial town.”

Gardner defended his ability to serve as Mayor Pro Tempore and as an alderman.

“There is no documentation that says I cannot sit and serve here as Mayor Pro Tem or an alderman from what you’ve just seen that I went through,” Gardner said.

UPDATE: Suspect fires at officers, remains at large during…