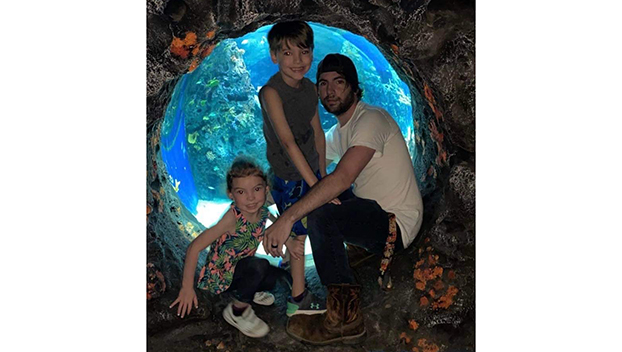 Bryan Fletcher Jr., kneeling at right, poses for a photo with his daughter Zoe and son Benjamin at the aquarium in Biloxi on May 9, 2021. One year later, Fletcher died when struck by a vehicle in Clayton, Louisiana. (Submitted Photo)

CLAYTON, La. — A man was killed when struck by a vehicle while walking in the early morning hours Monday near his home in Clayton, Louisiana.

Brandy Spears, the public affairs director with Concordia Parish Sheriff’s Office, confirmed that a 911 call had been received at approximately 6:35 a.m. Monday, May 9, regarding a pedestrian being struck by a vehicle.

Bryan Fletcher Jr., 30, was reportedly walking along Marlette Road in Clayton, La., when the driver, Myron Jefferson Jr., struck Fletcher with his vehicle around a curve.

Concordia Parish Sheriff’s Office and Louisiana State Police both responded to the incident and Fletcher was pronounced dead at the scene.

Spears said it remains under investigation by Louisiana State Police.

His sister, April Nugent, said Fletcher was a good father and good person altogether who was well-liked by those who knew him.

“He did carpentry and was actually starting a new job on Monday when he got hit,” she said.

Fletcher woke up Monday to find he had a flat tire on a vehicle he needed to drive to work.

He was walking to his sister’s house about a mile from where he lived for help, Nugent said.

“We’re just heartbroken,” she said. “My grandpa called me at about 7:15 that morning. He lives just down the road from them. I was just getting up and getting my kids ready for school. I started screaming, crying and I couldn’t even talk. I was devastated.”

She said she will remember her brother like the funny, playful person he always was, who would do everything with his kids and played with them, “as if he was a child,” too.

She started a GoFundMe to help the family with funeral expenses.

“Several people kept messaging me on Facebook about what happened and how they can help,” she said. “I didn’t even think about it at first but people asked me if I would start a GoFundMe. It would help my mom. To be honest, she has cancer and has been saving money for her own burial but wound up spending it on his. He had no insurance. He just turned 30 and was healthy as a horse.”

Those who would like to help can visit gofundme.com/f/funeral-cost-for-bryan-fletcher-jr.