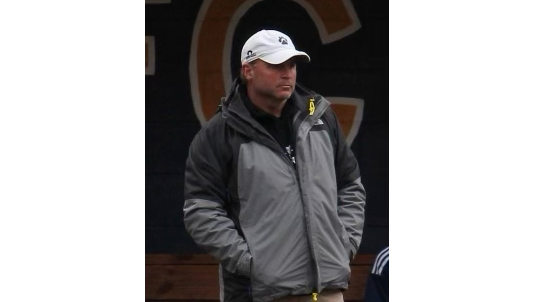 Jeff Long started coaching 10 years ago at Franklin County. Coming from Clinton, it was night and day between the two programs. The move gave him renewed enthusiasm as he has built a thriving program in Franklin County. (Submitted Photo | Jeff Long)

BUDE — Players clapped as they ran to the center circle on Franklin County’s soccer field. Pine trees surround the hidden gym of Franklin County. It is a true home field not shared with a football team, head coach Jeff Long said.

His boys reached the playoffs again this year but fell in the second round, a hump he said they can’t seem to get over. Long moved to Franklin County from Clinton about 10 years ago. It was the opportunity to coach boys and girls teams that had potential.

With the Indians, he had success winning four state championships. Each of those rings now sit on a shelf collecting dust. Long’s proudest accomplishments are not the state titles he won there but his work developing a program in Franklin County, he said.

That is why he is our 2022 All-Metro Boys Soccer Coach of the Year.

“Coming here renewed my enthusiasm for coaching. These players have nowhere to play on the outside, there was no (recreational) program to participate in,” Long said. “We have a fall league here on this field for Franklin County Youth. My players are out here reffing, coaching and teaching them the game of soccer. I don’t know of anybody else who has to run their own community soccer league and has high school players work as the coaches and refs. It is a unique experience.”

At Clinton, Long could select 25 out of 85 kids who tried out. With Franklin County, he had to find and develop players for his program.

Long’s first step to develop a program was creating a league for players to grow in. He is starting to see the fruits of his labor as some of those former youth players have risen to the high school ranks.

The youth program, which has leagues for 3 to 4-year-olds, 7 to 9-year-olds and 10 to 12-year-olds, is the only exposure the kids have to soccer. Without it, they would not have had the success they have had, Long said.

Franklin County has not lost a district game in ten years. They have come close to making school history by reaching the South State Final but have fallen short countless times. This season they lost to St. Patrick in the second round. The closest they have ever been to advancing was against Sacred Heart.

“We took Sacred Heart to four minutes to play and they scored a last minute goal and went on to win state,” Long said. “We proved to ourselves we could play with the semi-private schools. They are tough to beat. When we take the field with them, we are outmanned. Our effort to make up for it has to be extreme. We have had chances. Five years ago we went to OT at Resurrection and thought we scored in golden goal time but it was disallowed. We lost in a shootout.”

His squad this season is a solid group of athletic sophomores who have a love for the game. They have been pretty dedicated to practicing and improving their game. Franklin County will have one senior next season.

Long said they do a good job of disrupting the flow and playing differently than their opponents to get wins. It is a method that has worked against good teams in the playoffs, but during those semi-private school matchups they can’t seem to get things to go right.

“We can’t get the one call or bounce. It is coming with this group. We have some talented players who are getting better,” Long said. “The future is bright. We feel good about our program where it is. We feel like we had an impact on soccer in this area by helping the game grow. They are carrying on what they were taught in youth soccer. We play on Mondays and Thursdays under the lights. There will be 700-800 people watching. It is exciting. It has really created an atmosphere here. It has been huge for my high school team.”

Long’s career in coaching began in 1996. At the time, he played for a semi-pro baseball team called the Jackson Gray Sox and was in the World Series in Wichita, Kansas. His mom called him and told him he had a job interview at Warren Central.

The day of his interview, he thought it would be for a baseball coaching job. It was for soccer. He took the position and has coached it ever since. Soccer is a non-stop game with excitement and passion. He said there are a lot of people who don’t understand the game but once they do they gain an appreciation of the sport.

He has watched it and has seen his kids learn to love the game and understand it. Their outlook changes right before his eyes. At Franklin County, he is able to be more hands on, teach the game, figure out strategies and develop different ways to defend and attack. He also is tasked with figuring out how to develop different players.

“At Clinton, all I had to do was discipline and steer the boat. I didn’t feel like I was a tactical coach until I came here,” Long said. “For me, the most special part of coaching is being able to coach my daughters. These kids here at Franklin County pour their heart into this team.They enjoy being a part of something special and it has been a great experience for me.”

The Bulldogs are not settling for playoff appearances, they have a goal in mind to make school history. Long said his teams every year have a goal to work hard no matter what. In the team’s locker rooms, posters of previous kids hang above the lockers with their stats.

One stands out in the boys locker room. It is a kid who scored one goal his whole career with Franklin County. It won them a playoff game, Long said. It took one moment for that kid to be immortalized in program history. That’s all it takes.

At the end of a soccer season, Long takes time to create a DVD with highlights, bloopers and inspirational music playing in the background to give to the kids. He plays some on the bus about 30 minutes before they reach a game so they are pumped up and ready to play.

“The kids say they are scared to death of me. I feel like I have always been a players coach. I’d rather talk to the player. I am here for them. I want to give them the best chance possible to reach their potential and create memories that last forever,” Long said. “This is home. The kids group up out here playing soccer and then go on to high school and maybe college. Ben Yarborough, Tony and Gena Mullins and Stephanie McCormick set the groundwork for Franklin County soccer 15 years ago. I happened to come along at the right time.”