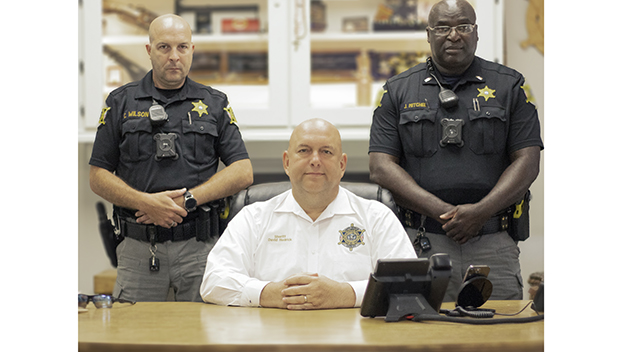 VIDALIA — In less than a year, Concordia Parish Sheriff’s Office investigators have encountered around 400 cyber-crime cases and arrested at least 30 suspects in those cases.

Many of those arrested were registered as sex offenders.

Sheriff David Hedrick said this uptick in arrests is not the result of an increase in crimes, but instead is reflective of the department’s offensive measures to stop worse crimes from occurring and keep the parish’s children safe.

“I’d much rather be proactive than reactive,” Hedrick said.

In the summer of 2021, CPSO implemented a Cyber Crime Unit capable of tracking down perpetrators who use their devices for illegal activities, such as downloading illegal pornographic material or using social media platforms to contact juveniles for illicit reasons.

“One of my main goals as sheriff is to protect the lives and property of the people in our parish and the most vulnerable among residents are children and elderly,” Hedrick said. “Establishing a highly sophisticated cyber unit is part of fulfilling that mission.”

Chief Deputy Fred Middleton said the sheriff’s office has a device called “GrayKey” and access to an “Oxygen Forensics” program. These devices utilize technology developed within the last year or so and are rarely found among other law enforcement agencies, he said.

“There’s only about eight in the state of Louisiana and two of them are owned by the Attorney General’s Office. We’re very fortunate to have one of those. It’s so sophisticated that … if you have your cell phone and some crime is committed, it can tell you if your phone was horizontal or vertical or it can tell you if your flashlight was on or off.”

One reason the program is not commonly found is that it’s expensive and a lot of other rural departments in Louisiana do not have the resources that the Concordia Parish Sheriff’s Office has, he said.

Middleton said the programs cost approximately $500,000, about $100,000 of which was provided to CPSO through a grant from Operation Underground Railroad, a non-profit with a mission to aid law enforcement in their efforts to combat human trafficking and sexual exploitation. The rest of the money CPSO was able to find within their budget.

“You can’t put a price on protecting children,” Hedrick said. “Our agents have worked hard to find the money to fund this.”

Having this technology in Concordia Parish also benefits any surrounding departments, or agencies statewide, who ask for help, Hedrick said. Last fall, the Cyber Crime Unit was able to help the Adams County Sheriff’s Office locate the body of a Natchez teen who had been missing for months.

Bill Calvin Jr., 19, disappeared around July 21, 2021. On Oct. 26, human remains identified as Calvin’s were found in the woods approximately 250 to 300 yards off of Booker Road in Natchez. He appeared to have been shot in the head, Coroner James Lee said at the time.

“Through all of the tools at our disposal, we were able to figure out where the body was at and give the Adams County Sheriff’s Department all of that information. Within about 14 hours of the time we told them where we thought he was, they found him,” Middleton said.

“With our Cyber Crimes Unit, we solve murders that occur throughout the nation for other agencies,” Hedrick said. “Adams County is one of the counties that we’ve been able to assist by locating the missing or deceased.”

The technology has also helped the District Attorney’s office in prosecuting cases he said.

“Transparency and being able to show word by word, picture by picture, to a jury has been very instrumental to our success. Any time a detective has a tool to show you exactly what happened and how and present a better case to the jury through the District Attorney’s office the more successful the case is going to be.”

Hedrick says the Cyber Crimes Unit is one of many improvements made at the sheriff’s office within the last year. The jail and dispatch office has undergone renovations, including counters moved, walls removed and fresh paint and new floors so that the facilities are brighter, cleaner and more open.

With financial support from Syrah Resources and other entities in the community, the Sheriff’s Office has been able to purchase new portable radios and tasers and implement a program for dispatch called 911Eye.

This allows the dispatchers to send a link to the caller’s mobile phone which the caller can use to allow them and officers to access the camera on their device to see live, on-scene photos and videos.

Next, the sheriff’s office is implementing a Victim’s Advocate Program where an officer will be assigned to notify victims when someone bonds out of jail and keep them informed during the entire legal process, Hedrick said.

“When your community knows you’re doing the best you can and that you are actually providing a service that has been a long time coming, they want to give to you and want you to have the tools that you need to fight crime,” he said.