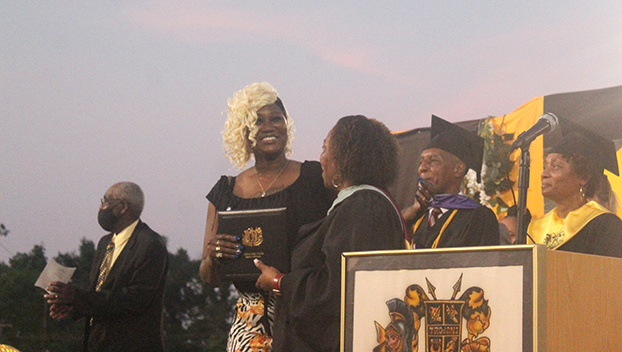 Marcie Perkins accepts an honorary diploma for her son Re’Ondre Griggs who was killed in July of 2020. He was 16 years old. (Hunter Cloud | The Natchez Democrat)

FERRIDAY — Confetti rained down from the stands and balloons floated into the clear evening blue sky as 65 students walked across the Ferriday High School graduation stage on Friday.

Principal Kimberly Jackson said her first senior class at the school would be her favorite one, joking that the seniors  found her cell number, her house, her Facebook, her other facebook, her snapchat and the snapchat she used to keep tabs on them.

Her first class included 19 students who graduated with honors.

Salutatorian Takera Spurs welcomed the crowd to the ceremony.

She shared how her grandfather had died when COVID first hit. It was challenging, and she wanted to give up at times, she said.

“Through all the obstacles, I stayed strong and dedicated,” she said. “Tupac Shukar said ‘Life is a wheel of fortune, and it is our turn to spin … Reality is wrong, and dreams are real.’ Dreams are achieved through hard work. We must not fear the unknown but embrace challenges together. We learned many lessons and must use them to succeed.”

Valedictorian Shekayla Miller took the microphone next. She won the 200m dash at the LHSAA 2A state meet and was a key basketball player for the Trojans. She credited her coach Lisa Abron with challenging her to be better academically.

Miller told the crowd Phillipians 4:13, which says “I can do all things through God who gives me strength,” gave her courage to keep going. She left the crowd with words of encouragement.

“As we leave here tonight, I encourage you to live,” Miller said. “As our lives change, we will hopefully continue to be friends.”

Once the class of 2022 received their diplomas, they took their seats. There was one more diploma to present for the night.

Marice Perkins rose from her seat on the graduation stage. Her son Re’Ondre Griggs was killed in a shooting in Clayton. The vehicle he was driving flipped into a bean field, but the police chief said he died from a gunshot wound.

Griggs was 16, his teammates wore #LL23 in his memory throughout the season. It was his basketball number, his mom said. A roar went up from the crowd as she received his honorary diploma.

“I knew about it because I got an invite. I was thrilled when I got the invite,” Perkins said. “It was heartbreaking. He was such a good kid. I just wanted to get a chance to see him graduate. He loved to play basketball, and we miss him.”