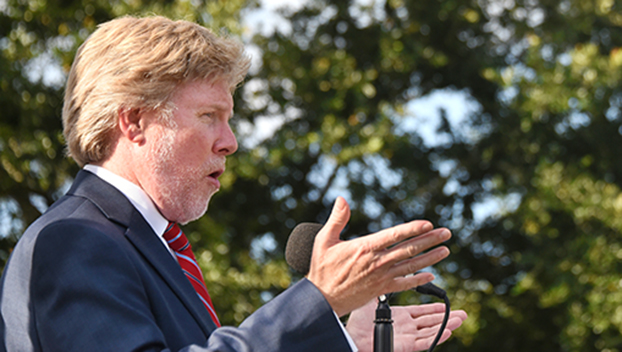 Natchez Mayor Dan Gibson gives the first State of the City address in front of the bandstand on the Natchez bluff. (File Photo | The Natchez Democrat)

Carpenter sent emails to members of the Board of Aldermen, Natchez city attorney Bryan Callaway, members of the media and others this week, pointing out the portion of city code that requires the Natchez mayor to work exclusively for the city.

Natchez City Code Sec. 2-105 reads the mayor of the city shall devote full time toward the discharge of the duties as mayor; the mayor shall not enter into the employment of anyone other than the city; that the mayor in no way should be prohibited or discouraged from making investments in companies if investments do not require any time on the part of the mayor.

Carpenter pointed out that Gibson’s website, Natchezinnsider.com, lists him as working as an active lobbyist for the insurance industry and an active manager of this bed and breakfast operations in Natchez, which include Garden Song and the Stanton Guest House.

Gibson responded to Carpenter’s allegations Thursday morning by email, thanking her for pointing out erroneous information on the website.

“Thank you, Alma, for bringing to our attention this inaccurate information on the Natchez Innsider website,” Gibson wrote. “As a full-time mayor, I can’t tell you when I last had the time to even look at it.”

Gibson said he has contacted the individual who oversees the website and asked that the incorrect information be taken down.

“I had to resign from MASI (the lobbying firm) in July of 2020 upon my election as mayor. Clearly, I would never have the time to do both jobs,” Gibson wrote.

He also said in the email that while he continues to be invested in the bed and breakfast operations, the management of each has been turned over to his wife, Marla Gibson, and other employees “quite some time ago. They do a fine job of running the properties so that I can focus on my full-time job as mayor.”

At one time, Gibson was a regular piano player at Restaurant 1818 at Monmouth, but said he has also had to give up that job, “although from time to time I still find time to tickle the ivories for fun.”