In its third commencement, Concordia Parish Academy graduates Class of 2022 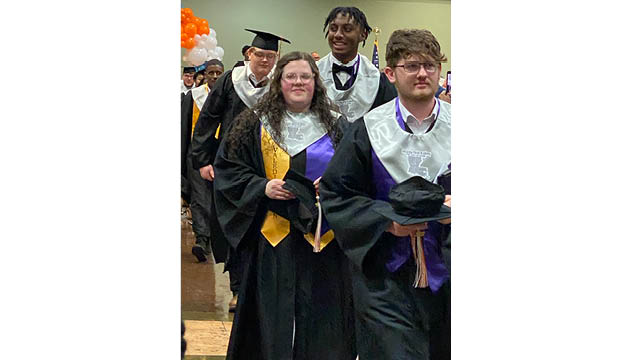 Members of the Concordia Parish Academy Class of 2022 file out of the Vidalia Conference and Convention Center after graduation Friday night. (Jan Griffey | The Natchez Democrat)

NATCHEZ — In its third commencement ceremony, Concordia Parish Academy of Math, Science and Technology graduated 21 members of its Class of 2022.

Hundreds of friends and family filled the Vidalia Conference and Convention Center on the city’s riverfront Friday night to watch the graduates receive their high school diplomas.

Even though Friday was only Concordia Parish Academy’s third graduating class, most of the students who graduated this year have been together for 10 years of more, said Valedictorian Brooklyn Hall.

Hall said her classmates had become like family. “We gathered together to support one another,” she said.

“The King James version says, ‘For I know the thoughts that I think toward you, saith the Lord, thoughts of peace, and not of evil, to give you an expected end,’ ” Hall said. “The New International version puts it this way: ‘For I know the plans I have for you, declares the Lord, plans to prosper you and not to harm you, plans to give you hope and a future.’ No matter what life throws at us, we have to get back up and strive ahead,” Hall said.

“We have accomplished a major milestone in life,” Powell told his fellow graduates. “This isn’t the end. It’s just the start.”

The graduation, scheduled for outside at the amphitheater across from the convention center, was moved indoors because of the threat of rain, said the school’s principal, Whest Shirley.

Seven members of the graduating class received special Concordia Diplomas, which are awarded to students who graduate with at least a 2.5 grade point average, master the state’s core curriculum requirements, score a minimum of 22 on their ACT and are involved with dual enrollment with a college or university.