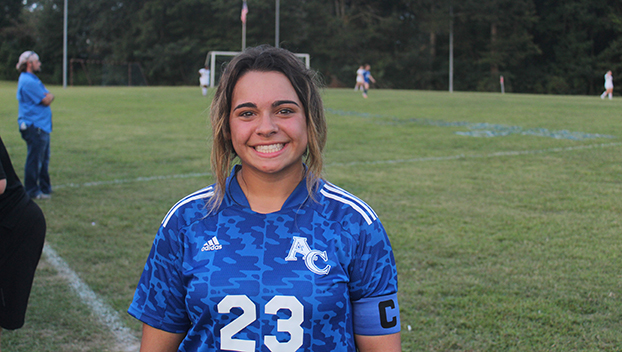 Maddie Campbell started playing soccer at five years old. She is a senior and will soon graduate. Over her senior season, she scored ten goals. Five of those came against Cathedral. (Hunter Cloud | The Natchez Democrat)

NATCHEZ — Adams County Christian School senior Maddie Campbell had a phenomenal year in a forward role scoring five goals against crosstown rival Cathedral and tallying up 10 goals this season. The defender was asked to move forward at the start of the year and she gave everything she had.

It is her tenacious spirit and can-do attitude which helped her score goals this season and why she is the 2022 All-Metro Girls Soccer Player of the Year. She lives by the Bible verse James 4:10 (NIV) which says, “Humble yourselves before the Lord and he will lift you up.”

“It is a reminder to humble myself. I have always tried to stay humble and he will always lift you up,” she said.

Campbell found out she would receive the honor from her mom. Over family dinner at Little Tokyo it is all she talked about, she said. Her soccer career started when she was five years old in the youth leagues and in seventh grade at ACCS. Campbell said she never thought she would earn the player of the year honor.

At the beginning of the season, Campbell was practicing in a hot and steamy rain as a defender during the Rebel’s summer practices. Head Coach Pam Weatherly-Williams moved her to forward and that would remain her position for much of the season.

It was nerve-wracking at first because it was a new position. Forwards are expected to score goals, which is the opposite of a defender’s job to protect the goal at all costs. Campbell was a strong defender at center back.

Over time she got used to playing the role. In a game against Copiah Academy, she was sent to the backline by her coach. She couldn’t stand being in defense. It felt weird and she wanted to be upfront attacking so Weatherly Williams moved her back to the front.

Before this year, Campbell never had the opportunity to score. This season she had more than enough chances to score.

“Scoring goals just kept getting exciting through the year. It was all adrenaline,” Campbell said.

Against Cathedral, she scored a brace, two goals, on the road and capped off her senior season with a hattrick in front of a home crowd. About eight months later, she nearly forgot the fact she scored a hattrick. After the game, she was surprised by the same news.

Throughout the season she chased down balls and pressured defenders with a relentless attack. Her engine kept going and she kept trying to score. One of the goals against Cathedral was scored on a corner kick and rebound where she put herself in the right position. Her final goal on senior night was from a counterattack.

“It was a special night,” she said. “Going up front I felt more like a leader. Madi Cooley and I lead the team this year. I think we did a good job. I don’t quit because I love the game. No matter what, I try to give everything I have. Anything I do I will give all the effort. I’m always motivated.”

Her teammate Madi Cooley also motivates her because Cooley is a hustler. The two lead the team by giving their all this season.

Graduation is on the horizon for Campbell as AC graduates on May 20, 2022. She will go off to Jones College in Ellisville to get an associate’s degree in radiologic technology. After Jones, she will go to Mobile, Alabama to get a degree in Sonography from the Institute of Ultrasound Diagnostics.

May 6 was the final day of classes for Campbell but she finds herself stopping by campus. This summer she plans to help Weatherly-Williams in practice. High School went by fast, she said.

“I wish I could do it all again. High school flew by and it was fun. Just being out there with your team was fun,” Campbell said. “I’m going to miss the team and the games. All the adrenaline and excitement. I’ll miss playing out there. I thank God for giving me the ability to play. I wish more people could realize that. Some people can’t do what you can do but you can. It is a God-given ability you need to use.”

While Maddie is leaving AC, her sister McKenzie Campbell will have an opportunity to step right into her sister’s shoes. On the basketball court, McKenzie plays with high intensity and passion. She has the same approach to playing soccer as a defender.

Maddie said she wants her sister to “Continue to play soccer and have as much passion and love for the game in her high school career.”