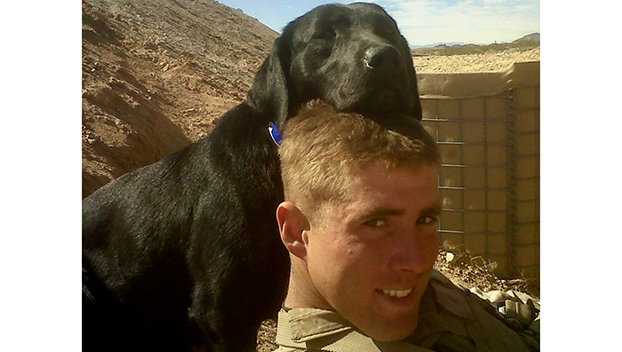 Marine Corporal Jared Heine and his dog Spike in Afghanistan where the two served for eight months. They encountered 10 bombs and survived three explosions in their time overseas. (Submitted Photo)

FRANCISVILLE, La — Corporal Jared Heine, the son of Mary Strahan Heine of St. Francisville, grandson of Walter and Patsy Brown of Natchez, died May 8 after suffering a head injury during a seizure at home.

Jared leaves behind a fiance, Evan Anna Egana, and their daughter, Savannah Heine.

Heine was a bomb dog handler in the U.S. Marine Corps and met his service dog, Spike, when stationed in South Carolina. The two trained in 2011 before being deployed to Kajaki, Afghanistan.

In the Middle East, Heine and Spike served a tour of eight months and encountered 10 bombs. They survived three explosions. The final one knocked Heine out of patrol and he earned a purple heart for his injuries.

Upon returning to the U.S,, his service dog Spike was sent to the capitol police in Richmond, Virginia, and the two were separated until 2015. Heine’s mom, Mary, was able to track down Spike through Facebook and the two were reunited. Walter Brown said the two were inseparable.

“We all wondered what Jared would do when Spike passed away,” he said.

He added at one point in time, it seemed Spike was the most popular dog in the U.S. Jared Heine took him to Cathedral School in Natchez to meet with elementary students and they all seemed to know Spike, Brown said. Spike and Heine walked a game ball out to midfield for a military appreciation game for Cathedral while Ron Rushing coached there.

Brown said when they entered buildings, Spike would sniff around the walls of the buildings like he had been trained to do. Spike had such a tight bond with Heine.

Brown said he believes Spike sensed something was wrong last weekend before the funeral. Spike searched and sniffed around, presumably looking for his companion at a meal held in Centreville for Heine’s close friends.

About 20 of those close friends showed up to the funeral from all over the nation. Of the Marines, there were several who had suffered traumatic injuries.

Heine touched people’s lives and that was evident to Brown when he saw those friends together.

“They had experienced trauma and came to pay their respects. It was touching. There were so many people there,” he said. “One of his leaders said he had an effect on people that was unreal. Anytime they had a job to do, he was the first one to volunteer. The reason people were attached to him was because people looked up to him.”

Spike will live with Heine’s mother, Mary Strahan Heine, and a man who owns puppies from Spike’s bloodline is giving the family a puppy. Brown said Heine paid a deposit for the puppy before he died.

Those who wish to make a donation to the Semper Fi Fund to help other combat wounded, ill and injured marines can do so at semperfifund.org.