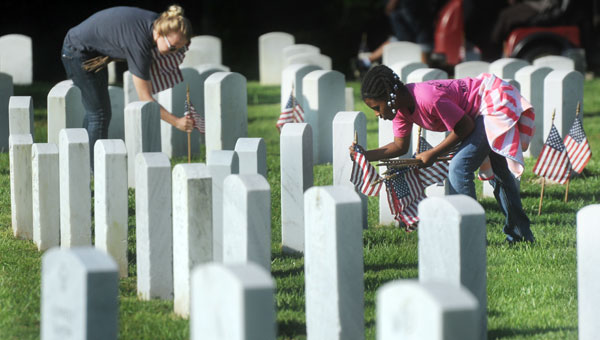 NATCHEZ — On Memorial Day, which is Monday, May 30, people across the nation will gather to remember and pay respects to the men and women who fought and died for freedom for all in the United States.

The Miss Lou communities of Natchez and Vidalia, Louisiana, have a special way of remembering our nation’s fallen heroes dating back nearly 160 years. This tradition continues on Monday.

The 2022 Memorial Day foot parade is scheduled to begin in the early morning of Monday, May 30. Line-up starts at 7:15 a.m. at the corner of Magnolia and Alabama streets in Vidalia.

From there, starting at 8 a.m., marchers will head across the bridge. A memorial service to honor veterans is expected to begin after the procession at 11 a.m. at the Natchez National Cemetery. Natchez historian Ser Sheshs Ab Boxley said special guests will be in Vidalia and Natchez for this year’s celebration.

The procession from Vidalia to Natchez is believed to be one of the longest-running Memorial Day celebrations in the country.

The National Secretary of the Women’s Relief Corps Kathy Bowser would be visiting from Murphy, Illinois, to attend the festivities, he said. Also attending is a special guest researcher, Cheryl Wilkerson, who is a former student at California State University Northridge who studied the history of the three Grand Army of the Republic posts in Vidalia and Natchez, Boxley said.

Before the Mississippi River bridges joined Natchez and Vidalia, the Parson Brownlow Grand Army of the Republic Post No. 23 would cross the river to Natchez by ferry boat, where it would join with the General Thomas E. Ransom GAR Post No. 16 and General John A. Logan GAR Post No. 24, Boxley said. The three posts would meet at “the gateway to Natchez” — a former tollbooth located at what is now the Natchez Visitor Center. From there, they would march to the Natchez National Cemetery to honor fallen comrades, Boxley said. At the time, it was called “Decoration Day” and was recognized annually around May 30 until 1971, when the federal government officially recognized Memorial Day as a federal holiday to occur annually on the final Monday in May.

The tradition of gathering at the National Cemetery has continued each year since, and the Vidalia GAR post remains operational.

As a researcher for the Cal State “Courthouse Project,” Wilkinson studied the GAR posts of Natchez and Vidalia, Boxley said. She gathered newspaper articles that annually recorded the Memorial Day procession. Because many United States citizens did not experience freedom until long after the Civil War, special GAR flags will be erected at the graves of specific U.S. Colored Troops, Boxley said. Then at noon Monday, following the Memorial Day celebration, there will be an African libation service at the cemetery led by an African Chieftain native to Ghana, Africa, who lives in Lafayette.

Boxley said he led many of these libation ceremonies in years past, during which the graves would be decorated with Rosemary to remember the sacrifices those troops had made to make all Americans free.

“We always do something to keep their memory alive,” Boxley said. “That is what we’re hoping to do with these guests coming.”

UPDATE: Natchez High lockdown over; suspect in custody after…