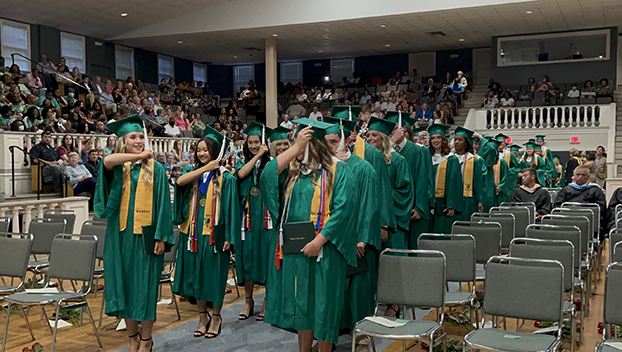 NATCHEZ — A wide array of emotions was displayed during Cathedral High School’s Class of 2022 graduation ceremony on Friday night at the Natchez City Auditorium.

Forty-four Cathedral Students walked across the stage to receive their diplomas on Friday.

During her salutatory speech, Laura Doan couldn’t quite make it through the long list of happy memories she shared with her classmates without shedding a few tears.

“I owe where I am today to the many people who have helped me overcome various challenges,” Doan said. “One of the most significant people in my life is Lizzie (Elizabeth Doan), who told me that it doesn’t matter what people think and she recognizes and acknowledges my efforts and reminds me there are things in life that I cannot control. Thank you for never pressuring me and letting me know that my hard work is enough and that it is OK to struggle. I’m glad we will be roommates in College because who else will wake me when I fall asleep on my desk.”

Mary Catherine Drane also shared a few memories during her valedictory speech, some of which were met with soft echoes of laughter throughout the auditorium.

Drane recalled during their sophomore year when one of their teachers ironically “didn’t want to hear anything about a virus in China during our current events project,” and how surprised he would’ve been if he had known then what would happen next.

“While there may be many trying times in your life that leave you wondering ‘what’s next?’ and there will always be new beginnings and scary ends—while we move on to college, the thought of living on your own, making new friends or even washing your own clothes may be terrifying—but know that within, you are starting your life truly and fully what God created you to be. No matter what adversity, conflict or problem you run into, you are stronger with the guidance of God and with the help of your fellow peers,” Drane said.

The laughs turned to roars as many of the young Green Wave posed—or rather danced—for the camera while receiving their diplomas. Cheers erupted when James Paxton Junkin dipped low to the stage and Landon Lynch raised both of his arms into the air as if he were doing a victory run following a football touchdown.

Both Drane and Doan shared words of gratitude for their teachers, especially Jean Biglane—or “The Notorious Big” as Drane called her—who challenged them both in their advanced English classes.

St. Mary Basilica’s new pastor, the Rev. Aaron Williams, offered words of wisdom to the class whom he had just met a couple of weeks before their graduation when assigned to St. Mary.

He spoke to them about a scene from a book by C.S. Lewis called “The Four Loves,” and what it means.

The scene he described was a small cabin tucked into a valley and its owner standing on the edge of a cliff looking down at it. It is so close that he can make out the detail of the small cabin, but he still has to walk all the way around the cliff to make it down into the valley where his home is. At this point in his journey, he is closer to home than he has ever been and yet still far from it, Williams said.

“I want you to think about where your home is. What is it you love and are willing to venture through the treacherous terrain to get to?” He asked them. Williams said when he sat where the graduates were, he thought his home would be the priesthood. However, he later learned that what his heart desires is far greater than that, because heaven is where his home is. When he set his heart on heaven while working to achieve his goals, everything else fell into place.

“No matter where you are in your journey, you’ll learn that nothing on this earth will fully satisfy you,” he said. “The home your heart desires isn’t here. … Set your heart on heaven and on your journey there, don’t forget that you have a family here.”