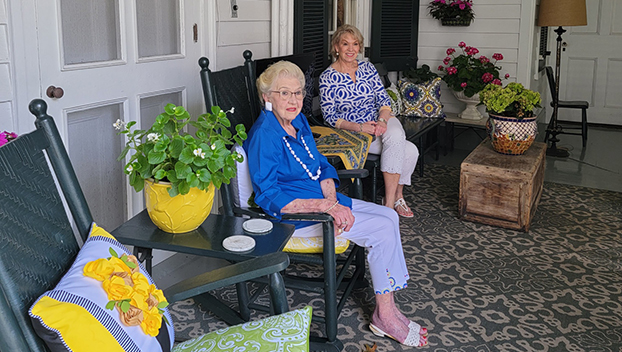 From left, the late Jeanette Feltus and her daughter, Marjorie Feltus Hawkins, are seated on the back porch of Linden for a photoshoot with Southern Living magazine. (Submitted photo)

Editor’s Note: Southern Living’s magazine feature described in the below article was produced by Natchez natives. Page Mullins, a graduate of Trinity Episcopal Day School and a senior editor from Southern Living, styled the photos. Catherine Tillman Whalen, a graduate of Cathedral High School, was the author.

NATCHEZ — The June/July issue of Southern Living magazine includes a feature about, “five historic homes with some of the prettiest views in Mississippi,” and they’re all in Natchez.

Unbeknownst to them at the time, Southern Living gave Hawkins and her family one last tribute to her late mother Jeanette Feltus, who died Oct. 1, 2021, a few months after the magazine interview and photoshoot.

“I wish my mother were here to see it,” Hawkins said of the magazine article. She described her feelings as “bittersweet.” When the family learned that the magazine was coming for an interview and photoshoot last year, Hawkins said her mother was “tickled pink” about it.

Linden has been in the same family since 1849 and Feltus directed operations there for four decades. Hawkins said she learned that she shares things in common with her ancestors that lived in the home, including an Oct. 30 birthday with the late Jane Gustine Conner who died in December of 1896 at age 94.

Hawkins told the magazine that when the COVID-19 pandemic hit, it gave her an opportunity to revamp Linden’s guest rooms so that the property could become a spot for destination weddings while maintaining its classic antebellum look. She and her husband, David, used their experience in hotel room design to replace linens and decor in each of the guest rooms, giving them a “clean and classic look for the brides,” Hawkins said.

Now open for more than a year, Hawkins said Linden has stayed busy before the magazine article was published.

“Our social media is blowing up about it, mostly with our clients congratulating us,” she said. “You never know where it could all lead.”

Debbie Cosey, the African American owner of Concord — or what is left of what was originally a 1,000-acre plantation until a fire took the main house in 1901 — continues to honor the 124 men, women and children who were once enslaved there.

The building, which has been renovated to form a B&B, with three spacious bedrooms and a back gallery on two levels facing gardens and centuries-old oak trees, was originally built as a dairy and pantry with living space for 20 enslaved people, the magazine states.

Also in this issue, New York Times best-selling author and Natchez native Greg Iles told the magazine that Edelweiss, an 1883 property with a “fairy tale façade,” had been a favorite of his since childhood. When the house became available to buy in 2008, Iles jumped at the opportunity with the intention of using it as his office for creating his published works. He and his wife put in three and a half years’ worth of renovations before an injury in a 2011 car accident made it not practical for Iles to climb the many stairs every day. Instead, he and his wife Caroline host the occasional party and book signing there and rent it out as an Airbnb.

The award-winning Oak Hill Inn, most loved for its gourmet breakfasts prepared by former New Orleans chef McGlynn, as well as Mauro’s remote garden with its frog- and lotus-filled fountains and pond, also makes an appearance in the magazine. Mauro told the magazine that opening a B&B wasn’t in the original plan. But after two years of renovations to make it livable, Oak Hill Inn regularly grabs a spot in Trip Advisors Traveler’s Choice Award’s list of top B&Bs in the country and in 2014, was ranked third in the world.

Southern Living notes that Natchez is likely one of few cities that allows visitors to stay at the mayor’s house. That was the case for Gibson before he married his wife, the former Marla Toman, in December 2021. Gibson and First Lady Marla live in a home on Orleans in Natchez.

Gibson has also displayed many other skills from B&B host, pianist and associate pastor to a lobbyist.

“I was surprised when they reached out last year,” Gibson said of the magazine. He added he had a short 30-minute window between meetings and city business to change into something casual for the photoshoot.

“I didn’t hear a whole lot from them after that. I had a sinking feeling that it didn’t make the cut. Then I got the phone calls saying ‘You’re in there,’” Gibson said.

Gibson said as a mayor, he doesn’t have much time to focus on his other skills anymore but continues to enjoy moments of rest on the quiet porch of Garden Song and uses his musical talent to perform at the occasional charity event. His new wife, Marla, has taken over a lot of the management of the properties. Gibson also owned Stanton Guest House until he recently sold it to a couple from Arkansas.

“I used to enjoy that so much,” Gibson said in regard to managing the B&B. “I want to make the most of my time as mayor. Not every city is experiencing the economic growth and opportunities that we have and I don’t take that for granted. … We’ve gotten too much started to let it stop. I’ve put a lot of my life on hold to be mayor but I truly feel that I am living out my calling.”