Ham, Cotten, and others ready to tee off at Beau Pré Club Championship this weekend 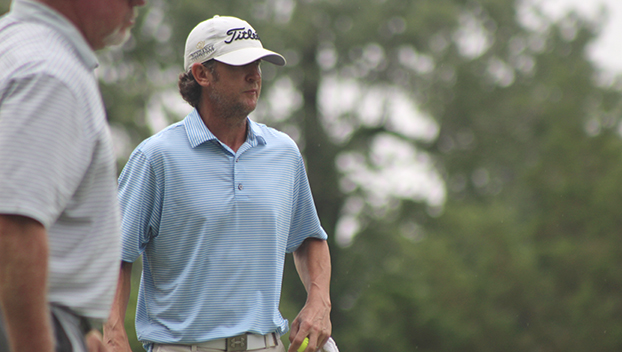 Casey Ham is the deafening club champion and will look to defend his title against a challenging field. The club champion earns the right to be the best parking spot at the club and bragging rights. Ham won the Senior Amateur title for Mississippi this year, his first. (Hunter Cloud | The Natchez Democrat)

NATCHEZ — Casey Ham will defend his championship against a stacked field of fellow members at the 2022 Beau Pré Club Championship, which will take place this Saturday and Sunday at Beau Pré Country Club.

Beau Pré club pro David Meyer said tee times each day will be in the mid- to late-morning, but as of Wednesday morning he was undecided as to when the earliest tee times will be for the member golfers.

Meyer added that the golf course itself is in good condition and is even better than what it was last year.

Ham said that he is somewhat excited about this year’s tournament. He then said that he’s glad to be playing in a tournament other than a four-ball. He also said that the course is in a lot better shape than it was a year ago, when he had rounds of 67 and 72 for a two-day score of 139 to win the championship flight of the open division.

As for how he’s feeling and how his golf game is going into the tournament, Ham said, “Doing fine. It’s fine. Just got to make putts.”

Ham added that winning the Beau Pré Club Championship means he gets to keep his parking space right near the clubhouse for another year. It would also mean joining a short list of members who have won this tournament in back-to-back years.

“They’ve had a couple of those. Jordan (Farmer)’s won it a couple of times in a row,” Ham said. “I’m not sure (if he’s playing this year). He’s been traveling a lot, playing some golf. We’ve got a lot of players playing well. Tom Bryant, Tee Cotten, Joe Willis, Mark Carter Jr.”

And while Ham believes Cotten is among the contenders this weekend, Cotten doesn’t exactly see it that way — especially with the number of younger members in the field.

“I don’t have very high expectations of winning. I’m 51 right now,” Cotten said. “We’ve got some good young bucks playing well. I’m going to put the ball on the tee and see how I can do.”

While Cotten may indeed be downplaying his own expectations, he is very excited for this year’s tournament.

“Always excited for golf season. This kind of kicks off our golf season,” Cotten said. “We have a new superintendent who’s done some great things with the golf course. The golf course is getting back to where we expect it to be.”

Cotten said he is feeling good as the tournament approaches and that his golf game is coming along with it being so early in the golf season.

“At the end of the weekend, it comes down to who can make the putts. So you’ve got to put the ball in the hole,” he said.

Another member who wants to win this championship is Bill Byrne, who has had his share of chances in the open division over the years, only to not break through and get that elusive victory.

“It’s always fun to win any tournament, especially a club tournament. It would be awesome to win and I’m sure the other guys feel the same way,” Byrne said. “I won the senior division about three years ago. I never won the open division. I’ve been in the last foursome three or four times. Several top-four finishes.”

Byrne said he’s always excited to play for the club championship because he qualifies for the Beau Pré Club, which will take place later in the fall.
“That’s a team competition. We enjoy that. We fight for spots to play in that,” Byrne said. “I haven’t been playing or practicing enough. So I’m going to have to give it my best. I would say (may golf game) is only fair.”

One of the youngest members in the field is Chase Kaiser and he, too, is looking forward to this year’s Beau Pré Club Championship.

“I’m very excited. This is the one I always look forward to because I grew up on the course and I want to win it. I make sure I don’t miss this,” Kaiser said.

As for how he feels and his golf game is as the tournament approaches, Kaiser said, “I feel good. My game’s pretty good. It’s been a little bit off and on lately. I got to work on some things the next three days. Hopefully I get everything to click on time.”

Kaiser said winning this particular championship would mean a lot to him because this is favorite tournament of the year.

“All the people I look up to in Natchez have won this. I’ve played this course since I was little. Winning, number one, would be crazy,” Kaiser said. “Because of the background I have with Beau Pré and all the relationships I have with the members. It’s something that’s been on my bucket list since I was 10 years old.”