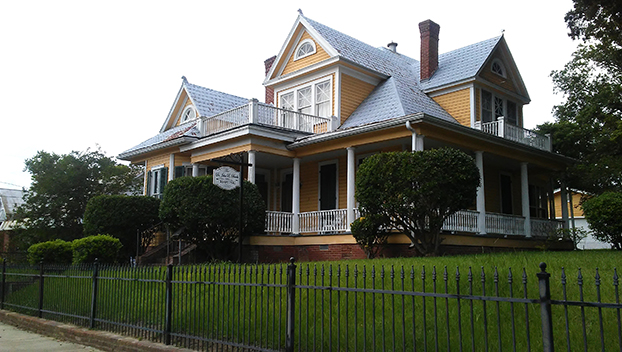 The Dr. John Banks House, located at 9 St. Catherine St., will be the site of a Mississippi Freedom Trail marker. The house once served as the NAACP Headquarters during the civil rights movement in the 1960s. (Submitted photo)

NATCHEZ —The Dr. John Banks House, which once served as the headquarters for the Natchez NAACP, will be the first site of a Mississippi Freedom Trail marker in Natchez. Approval of the designation by the Mississippi Humanities Council and Visit Mississippi, means the city will now be listed on the state’s Freedom Trail and the U.S. Civil Rights Trail.

News of the historic landmark recognition was announced recently by Dr. Stuart Rockoff, executive director of MHC. In an email dated May 23, he wrote: “I’m pleased to share the news that the Freedom Trail Scholars Committee has approved your application to place a marker at the Banks House in Natchez.”

Plans are underway for a dedication and unveiling ceremony later this year.

Devin Heath, executive director of Visit Natchez, said Natchez’s listing on the Freedom Trail highlights the important role the city played in the civil rights movement. “It is also an opportunity to honor and recognize those who paved the way for us,” he said.

“Seeing Natchez approved for inclusion on the Mississippi Freedom Trail and the U.S. Civil Rights Trail is a dream come true,” said Mayor Dan Gibson. “From day one of our administration, we have longed for this to happen. I am so grateful to Devin Heath and Dr. Roscoe Barnes III at Visit Natchez, and Mr. Robert Pernell, who first dropped this idea on my desk, and our amazing committee for making our dream a reality.”

The Mississippi Freedom Trail is part of the U.S. Civil Rights Trail. It was created in 2011 to honor the people and places that played a major role in the civil rights movement. A total of 25 markers are now posted on the trail, which includes Cleveland, Ruleville, Greenwood, Holly Springs, Clarksdale, and Jackson.

Support for the project, which is in Ward 4, also came from Alderwoman Felicia Bridgewater-Irving, and members of Rose Hill Missionary Baptist Church, which owns the property.

In addition to serving as the NAACP Headquarters, the Banks House was the home of NAACP President George Metcalfe. In 1964, during Freedom Summer when a thousand volunteers converged on the state to work with Black Mississippians to register voters and operate Freedom schools, members of the Student Nonviolent Coordinating Committee (SNCC) resided at the house.

In January 1965, “night riders” who committed acts of violence at night intent on inspiring terror fired shots through a window of the house. On Aug. 27, 1965, Metcalfe suffered serious injuries when his car was bombed at the Armstrong Tire & Rubber plant by the Ku Klux Klan.

The posting of the Freedom Trail marker in Natchez has a price tag of $9,000. However, it is made possible through a partnership between Visit Mississippi and MHC. The two agencies are using federal funds through the U.S. Economic Development Administration to cover the cost of 20 Freedom Trail markers throughout the state.

Man charged with May murder, aggravated assault scheduled to…