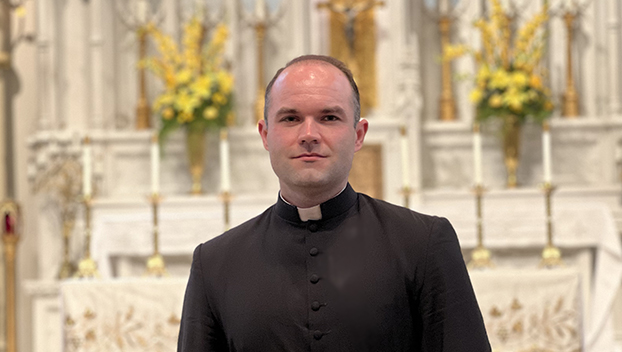 The Rev. Aaron Williams first visited St. Mary Basilica as a child and said he remembers being in awe of the church’s beauty. The Jackson native began serving as rector of the church and Cathedral School in May. (Sabrina Robertson | The Natchez Democrat)

NATCHEZ— The Rev. Aaron Williams has had a lot on his plate since his arrival at St. Mary Basilica.

Not only did Williams arrive during Holy Week, which is one of the busiest times for a Catholic priest, but graduation at Cathedral Catholic School was near and he would be tasked with finding a new head administrator to lead the school next year.

He had a short window of time to introduce himself to the graduating class at Cathedral and get to know its members before addressing them at their commencement last week.

However, Williams said the school was one of the main things that drew him to Natchez, and he welcomed the challenge.

“Obviously, I love the beauty and the history of this church. I mean it has to be the most beautiful church in the South. But the school really was the draw for me. It’s why I wanted to be here,” he said.

Williams, a Jackson native, was raised by a mother who was a devout Catholic from South Louisiana and who worked as a secretary for the Rev. David O’Connor, a long-time former pastor at St. Mary.

“I knew Father O’Connor for pretty much my whole life,” he said.

Williams attended Catholic schools and graduated from St. Joseph Catholic School in Madison. He knew from a young age, perhaps 5 years old, that he wanted to be a priest someday, he said.

“My senior year of high school when all of my classmates were applying for colleges I applied for seminary,” he said.

He was sent to St. Joseph Seminary near Covington, Louisiana, for four years and studied another four years at Notre Dame Seminary in New Orleans. While there, he was dual-enrolled at the Liturgical Institute in Mundelein, Illinois. He holds two master’s degrees in divinity and liturgical studies and a bachelor’s degree in philosophy.

During seminary, Williams said he was assigned to teach 11th-graders at an all-girl Catholic school in New Orleans and later taught elementary students.

“That experience helped me understand just how much I enjoy being in a school environment,” he said.

He was ordained in May 2018 and his first assignment after he was ordained was in Greenville. He started as an assistant and became an administrator and led a committee to hire both the high school and elementary school principals at St. Joseph Catholic School in Greenville.

He was later assigned to Meridian for a few short months and immediately applied to be in Natchez as soon as he learned there was an opening.

“I really wanted to be back in a school environment,” he said. “Oddly enough, the bishop told me that I was the only priest who applied to take a school, which is why I ended up here.”

When he is not at work, Williams said he might be seen at the gym or at football games. He is good friends with the Kansas City Chiefs’ kicker, Harrison Butker.

Williams is also a professional and published organist and enjoys reading.

The shelves inside Williams’ office are covered with books that he brought with him when he came to St. Mary three weeks ago, along with a black and white cat named Reverend Mother.

She has already asserted herself as the church cat, sitting in Williams’ lap while he works and walking around the offices as she pleases, greeting whoever happens to walk in the door.

Williams said he came to St. Mary to preach a three-day mission in March, but first visited when he was a child.

“I remember then seeing the church and being amazed by it,” he said.

His first impression of St. Mary as the pastor is that it is one of the most active churches in the Diocese of Jackson.

“I think that actually has a lot to do with Father O’Connor having been here for so long. He had time to create a strong program here that has kept going.”

Another thing he noticed about Natchez is that, even though there is a sign that designates it as a great place to retire as you enter the city, it is also full of children. Natchez also uses old traditional Catholic practices that one might find in Louisiana but not a lot of in Mississippi.

“There are a lot of amazing treasures here,” he said. “It’s incredible.”