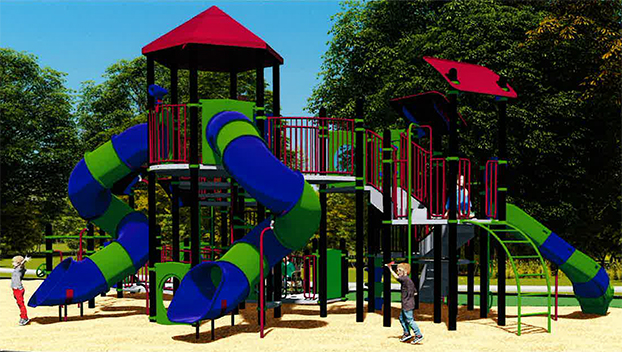 The city received one other bid before a Wednesday, June 1, deadline from Struthers Recreation based in Pelham, Alabama, for the equipment, which was higher at $521,649.

While weighing the bids, the city’s recreation committee considered factors such as ADA compliance and warrantees. Great Southern’s equipment comes with a lifetime warranty that would replace broken parts for free and also with detailed instructions and tools for upkeep, said Natchez Parks and Recreations Director Sonora Cole.

Cole said the city started advertising a Request for Proposals for the new equipment beginning in April and that the two bids submitted were both within the city’s budget for the project, which was $550,000.

“Because it is under budget, this will allow us to add more to our other free-standing equipment like the picnic tables,” she said.

Cole said the parts to arrive within 10 weeks and assembly can begin after that, adding that assembly 30 days.

“By fall our children will have safe, new playground equipment to play on,” Natchez Mayor Dan Gibson said.

Many of the city’s playgrounds have had no equipment since last spring.

Officials said the older equipment was removed because much of it was unsafe.

The new playground equipment is financed through a $2 million bond which the city is using to update all of its parks and buildings in Duncan Park and North Natchez Park. This includes a complete renovation of the North Natchez Park Youth Center and Duncan Park Golf Pro Shop with new ADA-compliant bathrooms.