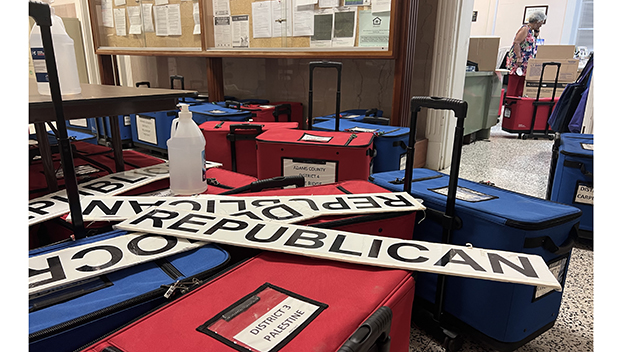 Boxes fill the hallway of the Adams County Courthouse at the end of Tuesday's congressional primary election. (Sabrina Robertson | The Natchez Democrat)

NATCHEZ — The incumbent United States Representative Bennie Thompson, who represents the 2nd Congressional District in Mississippi, won more than 95% of Democrats’ favor in Adams County during Tuesday’s primary election, according to preliminary results.

Turnout for the county was slow with around 17% of 18,888 registered voters showing up at the polls.

So far, Thompson has received 2,505 votes while his challenger, Jerry Kerner, won 125 votes in Adams County.

According to Entergy, 186 customers were affected by the power outage, which was caused by a broken utility pole.

However, the poll stayed open with voters making their selections in the dark. The four plug-in voting machines ran on backup battery power, Gardner said. Two of the machines ran out of battery before polls closed at 7 p.m., but voters could still use the remaining two at the precinct. All of the votes on each machine are saved on memory cards, so no votes would be lost because of the outage, Gardner said.

Even if all of the machines had stopped working there is still a backup plan, he added.

“We have paper ballots that we could use if all of the machines go out,” he said. “When there is a will, there is a way.”

Apart from the power loss, no other hiccups were reported during Tuesday’s primary election, Gardner said.