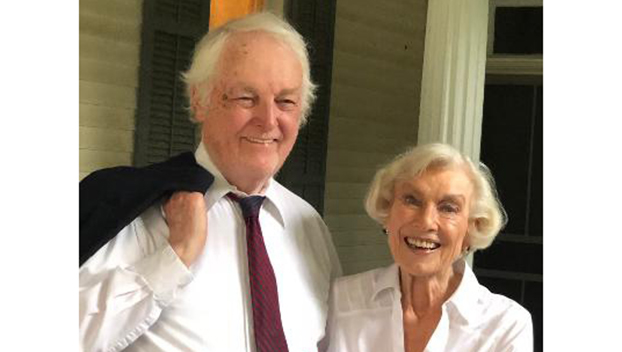 One of ten siblings, Danny was born in White Plains, NY on Sept. 14, 1933. He moved with his family to Natchez in 1936, where he later graduated from St. Joseph (Cathedral) High School. He grew up on Homochitto Street where his family kept a large vegetable garden and a cow, which he was sometimes tasked with milking before school. His first job was delivering newspapers and even in his old age he remembered the families on his route.

After serving in the U.S. Army during the Korean War, he graduated from Mississippi State (undergrad) and Ole Miss law school, using the G.I. Bill and savings from working offshore in the Gulf to put himself through school.

Danny practiced law in Natchez for over 50 years, initially joining the Brandon, Hornsby, Handy, O’Beirne and Benoist law firm. Once, his then 4-year-old son, Dan, Jr., described his father’s profession by saying, “He talks in the courthouse.” – true both literally and figuratively. As a young attorney in the 1960s, Danny served as the Natchez City Prosecutor during the civil rights movement where he made every effort to support equal rights for African Americans.

Being a Catholic was core to Danny’s life. He served on St. Mary’s parish council for several years. He also served as president of the Cathedral School Board. For many years, he provided legal assistance to St. Mary’s and the Diocese of Jackson. He was one of the founders of the Natchez Habitat for Humanity and served on its board. He also served on the board for the D’Evereaux and St. Mary’s orphanages.

Never accused of being fashionable, Danny enjoyed many outings with his splendidly dressed wife, Virginia, who often wore a selection of fine hats. He had a lifelong passion for Natchez history and love of being in Louisiana, especially including long drives around Lake St. John and down the levee toward the Atchafalaya River. He took great pleasure in the Mississippi River – looking at it, throwing rocks into it, and driving alongside it.

Danny loved to tell jokes and stories. At times, he enjoyed his jokes so much that he could not make it to the punchline for fits of his own laughter.

Danny had over 30 nieces and nephews. To distinguish himself from their many other aunts and uncles, he would sometimes introduce himself to them as “your Favorite Uncle Danny.” Being referred to as “Favorite Uncle” has stuck with some of them to this day.

Danny’s family would like to extend a special thank you to Ruth Powers, Amy Depta, Eleanor Cooper, Erin Kolb Bienvenu and Carey Walters for answering every phone call and their continuous love, support, and guidance throughout these last years.

The family would also like to extend a sincere thank you and express their grateful appreciation to Nell Green for her more than twenty years of love, care and friendship to Virginia.

In lieu of flowers, the family requests donations be made to the Natchez Stewpot, Cathedral School, St. Mary’s Basilica or a charity of your choice.