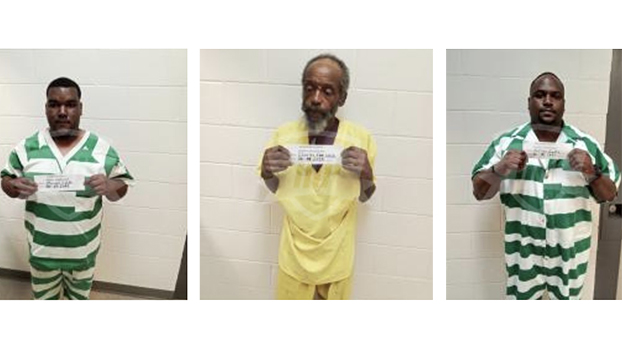 Pictured from left are Nathan Lollis, 37, Charles Lee Wells, 68, and Marcel Smith, 23, who were recently sentenced to life in prision for a 2018 murder in Wilkinson County.

WOODVILLE — A Wilkinson County jury recently found three men guilty of first-degree murder and conspiracy to commit murder in the death of Carl Newton in the county in 2018.

District Attorney Shameca Collins stated in a news release Thursday that Newton had previously shot one of the defendants, Nathan Lollis, but instead of pursuing charges, Lollis and two others sought revenge.

Lollis, who is 37, Charles Lee Wells, 68, and Marcel Smith, 23, were sentenced to 20 years for conspiring to kill Newton to run concurrently with a life sentence for murder by Judge Forrest “Al” Johnson, who filled in for Sixth Circuit Court District Judge Lillie Blackmon Sanders while she is on medical leave.

Collins said the three “beat and killed Newton” on July 16, 2018, at a secluded location in Wilkinson County.

“Street justice is not legal,” she said. “Violent acts will not be tolerated regardless as to who did what first. I’m sorry that Mr. Newton’s mother did not live to see this day but I am confident she would be happy to know that justice was delayed but not denied.”