On the move: Fleming’s next coaching adventure leads to San Marcos 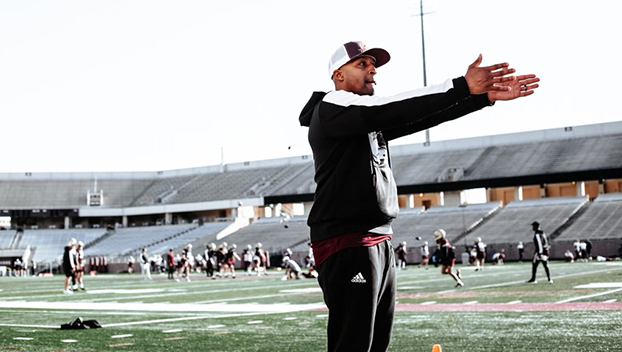 RJ Fleming’s last coaching stop was in Eastern Michigan but he made the move to Texas to be closer to family. He will coach the running backs at Texas State as he works towards becoming a passing game coordinator and offensive coordinator. (Submitted Photo | RJ Fleming/Texas State Athletics)

SAN MARCOS, TEXAS — Trinity graduate, Natchez native and former Eastern Michigan Wide Receivers coach R.J. Fleming is on the move again. This time his journey takes him to the sidelines of Texas State University where he is the running backs coach for the Bobcats.

Fleming was once a standout athlete at Trinity Episcopal Day School in Natchez where he helped the team win a state championship. After graduating from Arkansas State, he found a career in coaching at Arkansas Tech, Trinity International, Liberty and TCU.

Now he will be on the sidelines helping coach the rushing attack instead of passing. Fleming said he learned in his previous season at Eastern Michigan how to be detail oriented and approach everything with the mindset of being a professional.

“The players worked hard in everything they did. Our slogan there was ‘Be different,’” Fleming said. “We took a business-like approach to everything. Being here at Texas State is no different. We want to be pros in everything we do.”

He is three months into his new job and coached the backs through spring camp and their spring game. While Fleming said he enjoyed the opportunity and time at Eastern Michigan, the move to San Marcos brings him closer to family. He said about 40 percent of his family lives in the Dallas-Fort Worth area, which is just three hours from San Marcos.

An added plus was his good relationship with the head coach, whomFleming has known for three years.

Working with running backs also will help him achieve his goal of becoming a passing coordinator or offensive coordinator one day.

And, Fleming said football is a different sport in the South. In Texas, football is king. The team can go different places in the community and the locals know the players and coaches by name, he said.

Located only 30  minutes from San Antonio and Austin, Fleming said San Marcos is an ideal location for recruiting talented players. The school has yet to reach a bowl game, but he believes that will soon change.

“We have a great opportunity to do that,” he said. “Our kids want to win badly. From our head coach down, everyone is longing to win.”

Fleming also will recruit in Mississippi and Louisiana, and he recently wrapped up visits to schools in the MIss-Lou. He still owns a home in Natchez, he said.

“My roots in Natchez will never change. My area code will always be 601,” he said. “I’m a walking moving witness to the fact that Natchez produces fine people. I’m always on Cloud 10 with the way people carry themselves and the pride they have there. I’m a product of Natchez and I will never change the fact I’m proud of that.”