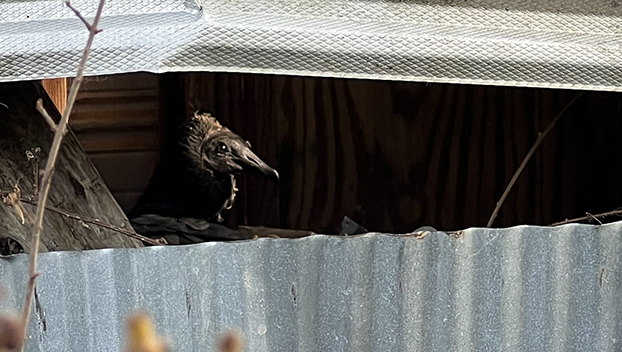 This is a baby buzzard living in an abandoned shed where its mom made their nest. Assistant Deer Program Coordinator Kamen Campbell said the MDWFP can not remove baby buzzards because they are federally protected. Occasionally, they will get a call about one squatting in a box stand or tree stand. The United States Fish and Wildlife Service is who you should call to remove a buzzard. (Hunter Cloud | The Daily Leader)

JACKSON — Young wildlife are abundant in the late spring and early summer throughout Mississippi. The Mississippi Department of Wildlife, Fisheries and Parks would like to remind people to simply leave young wildlife alone.

Hatching birds, newborn squirrels and fawns may appear to need help but it is best to leave them be. Kamen Campbell, assistant deer program coordinator, said does take great care in hiding fawns and they will often lay still making people think they are sick or injured. After a few weeks, a fawn can follow its mother and outrun most of its predators.

“Their survival strategy is to lay low and their mom will come nurse them a few times a day. If you find one it will be by itself,” he said.

Chances of stumbling across a fawn during the summer depends on where in Mississippi you are.  Does normally drop their fawns in Southwest Mississippi by the end of June and first few weeks of July. June and July is also a period of the year where landowners head out to their fields and timber to prepare for the next deer season. Campbell said the best thing a hunter or land owner can do is avoid habitat management practices from the last week of June through July to protect fawns in Southwest Mississippi.

Other wildlife in Mississippi

The public should be aware that sometimes young squirrels, rabbits, fox pups and birds can appear to be abandoned. They should be left alone, Campbell said.

“It doesn’t mean they have been abandoned. It is a major misconception,” Campbell said. “People don’t understand wildlife will leave their offspring unattended frequently. Usually 9/10 times you should leave it alone. Chances are the adults are looking at you and you don’t see them.”

Some species are federally protected such as buzzards. They can not be harassed, which sometimes causes some conflicts with landowners or hunters. Campbell said they will occasionally get a phone call because a buzzard made a nest in a tree stand or box stand.

He said the MDWFP can’t remove the buzzard nests but the United States Fish and Wildlife Service might be able to. People should leave them alone.

Turkey poults are another possible young wildlife you could encounter this summer. From the moment they hatch they will follow their mom everywhere she goes. Campbell said the only reason he would ever touch one was if one was injured in the road with a broken leg or another similar situation.

Predation and habitation are the most important factors in an animal’s survival, Campbell said. He added people always want to trap coyotes and raccoons in predator management.

The best management practice as far as what is most beneficial is habitat management. Land Owners or hunters who create good habitat will see better results in wildlife on that property.

MDWFP offers a free private lands program to help landowners and hunters manage their property based on site visits and recommendations. All a person has to do is fill out a site visit request form.

Campbell worked in the Private Lands Program for seven years before transferring to the deer program. It is a free service. He said it is best to schedule a visit outside of March to June because it is hard to tell where the deer browse is. Typically, only hunters are concerned with when the visit is.

“Anywhere from 10 acres to 10,000, we (the department) will go out there to make recommendations,” Campbell said. “Everyone will ask for different things, some want more turkeys or big bucks. We do it 365 days a year. We are out there in the field during visits. If we do go in the summer we usually try to go in the morning when it is cool.”