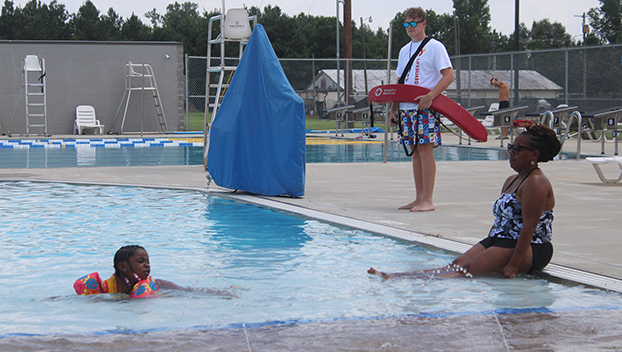 NATCHEZ — A flyer advertising an Adult Pool Party at the Natchez-Adams Community Pool on June 24 from 7 to 11 p.m. seems to suggest alcoholic beverages would be available, which reflects a change in policy for pool rentals.

The advertisement lists a $15 cost for a wristband and reads only those 21 and older will be admitted. It also shows appears to be alcoholic beverages on the flyer.

A number of readers have questioned the legality or liability issues surrounding alcohol being served during private events at the community pool.

Jimmy Ware, a member of the governing body that oversees the pool, said alcohol can be served by those who rent the pool for private events.

“Yes, you can serve alcohol. It must be in Styrofoam cups and in a certain area. And there can be no glass bottles. We did two parties and allowed alcohol last year,” Ware said. He said two deputies would be on duty for the June 24 party.

However, the contract currently being used for renting the community pool says specifically no alcohol is allowed.

In response, Ware said the new contract allowing for alcohol to be served at the pool during private events has yet to be approved by the full board that governs the pool.

“Our board hasn’t released the new contract yet,” Ware said.

The pool’s governing board, which is made up of three members appointed by the county and three by the city, meets the first Tuesday of the month at 6 p.m. at the office at the community pool. Its next meeting is Tuesday, July 5.

Natchez Alderman Valencia Hall, who is chairman of the city’s parks and recreation committee, said she had heard of no change that would allow alcohol at the community pool.