‘You all are heroes,’ Four graduate from Adams County Family Drug Court program 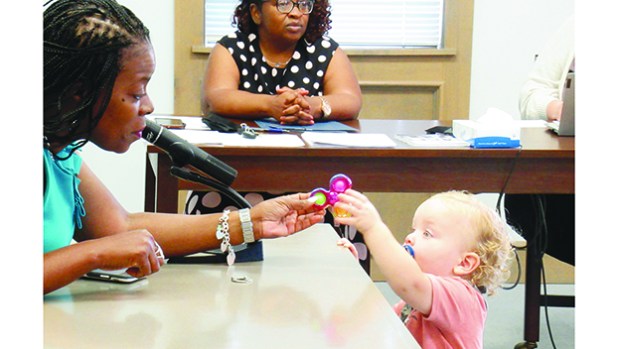 Angela James shares a toy with 19-month-old Lyrick during a Family Drug Court graduation on Tuesday in the Adams County Juvenile Courtroom. Lyrick is the son of drug court graduates Brandon Donahue and Heather Collins. (Maia Bronfman | The Natchez Democrat) 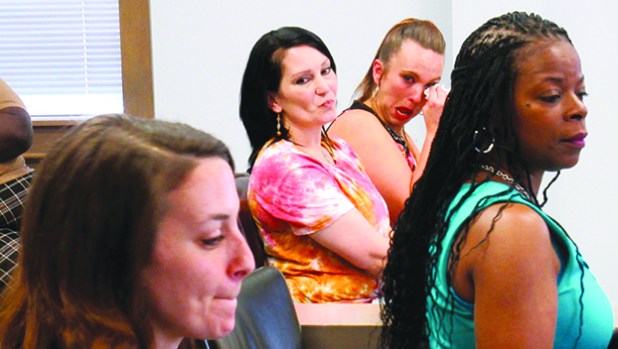 Pictured front to back are Heather Collins, Angela James, Holly Tillery and Candice Baxter. Baxter wipes tears as she describes her journey to recovery from drug addiction. She lost her newborn baby while at rehab in Raymond. (Maia Bronfman | The Natchez Democrat)

BY SABRINA ROBERTSON and MAIA BRONFMAN

NATCHEZ — Cherub-like and curious, 19-month-old Lyrik wandered throughout the Adams County Juvenile Courtroom during a family drug court graduation. His parents were there celebrating a huge milestone in their lives.

Four young adults graduated from the program on Tuesday, including Candice Baxter, Holly Tillery, Brandon Donahue and Heather Collins. Their families and friends were invited to share in their accomplishment of almost a full year of sobriety.

Four is a big number when referring to drug court participants finishing the program all at once, Judge Walt Brown said.

“It almost never happens,” he said. It’s not that many don’t finish the program, Brown added. Rather, few have progressed through the program at the same time as others and formed familial bonds with each other along the way.

Lyrik was named for Collins and Donohue’s guitar-vocal duets. Their family of three has grown. All of the graduates and some of the court personnel are now as close as relatives after going through the program together. Lyrik climbed into Baxter’s lap and shared toys with Angela James, guardian ad litem for children with parents in the program.

Each of the graduates completed a program that entails a combined 305 days of sobriety confirmed by drug tests and then 30 days of aftercare. They have to show that they can support themselves and their families, get a job and perhaps their diploma or GED if they don’t already have one.

All four graduates have another thing in common. They all have children who were affected by their addiction, Brown said.  As each of the parents showed up for court drug negative and attitude positive, they were reunited with their kids, he added.

“People say drug use is a victimless crime and it’s not,” Brown said. “There are seven victims of what you all did and they are your children. Those children are going to be OK now. … That is seven children that the state is not going to have to find foster homes for or parents or grandparents to raise them. Those grandparents and parents are victims of this too. There are victims, so many victims. … This program does work, but it’s not easy. You just have to take it one day at a time.”

Family Drug Court programs are confidential and typically press are not allowed in the courtroom. However, each of the four graduates voluntarily shared their success in the program with the public and wanted to use their stories to inspire others who may be struggling with addiction.

Additionally, June happens to be National Reunification Month, which recognizes efforts to keep families together, especially reuniting children in foster systems with their birth parents. To celebrate, graduates were greeted by a cake decorated with a turquoise ribbon, which sat outside the courtroom next to a platter of sandwiches and punch.

Brown said the drug court participants had a drastic change in attitude and appearance throughout the process. They all had smiles as they received their graduation certificates on Tuesday, in contrast to when they first appeared in court. Initially, they all “looked bad and felt bad,” Brown said. Some were also angry and resentful.

“In the beginning, I was so angry,” Baxter said.

Tears formed in her eyes as she spoke.

“I thought I was being picked on, but you were right. You cared about my kids when I didn’t.”

Baxter, a mother of four children, had a particularly trying recovery. She experienced a tragic loss that Brown said would’ve caused many to relapse.

Baxter came to Born Free New Beginnings, a residential rehab center in Raymond, while pregnant with her fifth child. It’s one of few places in Mississippi that will admit mothers who are addicts and allow them to stay with their children under 5 years old, she said.

Baxter became close with Collins and Lyrick while at Born Free. Seeing Lyrick helped Baxter cope with losing her baby as a newborn, she said.

“Lyrick was my little angel and my saving grace,” she said. “We were close. Me, Heather and Holly. We were all close. Holly and I came into this together and were living together in the same situation.  Born Free was the best thing that ever happened to me.”

Baxter said the program saved her life and wished there were more places like it in Mississippi.

“There is no doubt in my mind that I wouldn’t have made it if I wasn’t there,” she said. “When I lost my baby, they gave me the option to leave,” she said. “I had all of my things together and then turned around and said I didn’t want to leave. I need to stay because if I leave, I’ll be dead before the night is over because I don’t know how to deal with this. They shut the whole rehab down for weeks. They brought in private counselors for me, grief counselors and I stayed in the therapist’s office all day every day. I was so ready to come home and by the time I came home I said I wanted to go back to rehab.”

Collins, like Baxter, did everything she could to stay with her son Lyrick.

“I was just trying to get by the skin of teeth to get my kid,” Collins said about her feelings at the beginning of the drug court program.

Her fiancé Donohue said, “I wanted to stay away.”

Donohue was living in an abandoned hospital with no electricity and no running water with permission from the owner, Brown said. Today, he has his own place to live, a job and a new truck to drive. More importantly, the couple was able to keep their son and be a family.

In rehab, Collins said she learned coping methods like dealing with her emotions by understanding the reasons behind them.

Donohue’s mindset also changed throughout the drug court program. They both began to appreciate those who were trying to help them overcome addiction.

“If you’re an addict, if there’s something in you that wants to do small things, you have to try,” Collins said, encouraging others to participate in drug court. She now sees the value in it, and how it was transformative for her family. She hopes others will get the opportunity to see that too.

Collins wakes up each morning now looking forward to “everyday normal stuff with the same family,” she said, like playing their favorite song, “You Are My Sunshine” for their son.