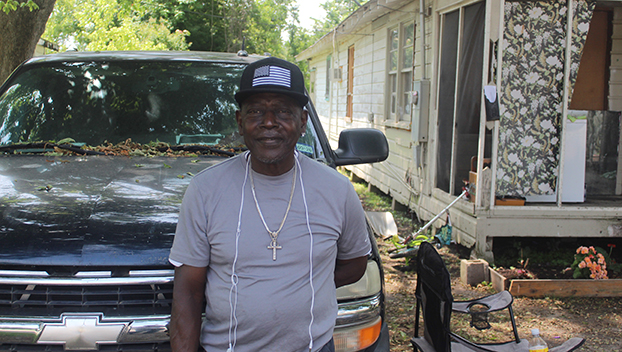 New Orleans native Lester Walton found a quiet home in Natchez. He moved to the Miss-Lou in 2010 and spends his days working or watching the world go by from his house on a hill overlooking the Mississippi River. (Hunter Cloud | The Natchez Democrat)

VIDALIA — New Orleans native Lester Walton sat in the shade of a tree in front of a home on Sycamore Street close to where The Dart landed Thursday. He moved to the Miss-Lou in 2010 and has lived in Ferriday and Natchez.

Walton said he was taking a break from doing some yard work at a house of a friend. He waved to people as they passed, talking in a thick New Orleans accent.

He’s quick to point out that he doesn’t miss living in the city. His sister died from an infection developed in the wake of Hurricane Katrina in 2005, he said. And there’s something else he said, pausing to listen to birds singing in the trees. “It is quiet here.”

Down in New Orleans, life had become too crazy. Crime and shootings were becoming too much, and Walton said he had a few run-ins with the law. Jail was no place for him, and it worried his mother.

Before she died, she warned him to stay away from New Orleans. That warning has kept him out of trouble ever since, and it was one of the reasons he left Ferriday for Natchez.

Life had become too wacky in Ferriday, he said. Two weeks ago, he was there visiting a friend when he heard gunshots.

“Everyone was running, trying to get out of the way and protect themselves,” Walton said.

He has found a quiet life in Natchez, on a hill overlooking the Mississippi River. Moos Barn and Grill is close by, and the neighborhood is filled with older people. He likes to sit and watch the world go by when he isn’t working.

Each morning he wakes up around 4 a.m., pours himself a cup of coffee, and watches the sun come up. It’s a habit he learned from his grandmother.

She taught her grandchildren to get up early so they could have time to work and eat. A necklace bearing a cross rests on his chest.

“He gives me the strength to get up every day,” Walton said. “I just try to take care of myself, and I try not to get too far ahead of myself.”

Currently, his brother is going through dialysis. Walton plans to make a return trip to New Orleans to visit him in a couple of months.

Next February will be his 65th trip around the sun. In his life he has lost his mom and dad and six of his eight siblings. He said he fights through the losses of his close family members each day.

“I think about my momma every day, every day I wake up thinking about her, and I go to bed thinking about her,” Walton said. “I miss those Sunday meals she would prepare: big macaroni plate, baked beans, potato salad. She made sure everyone had a plate to eat. She inspires me.”