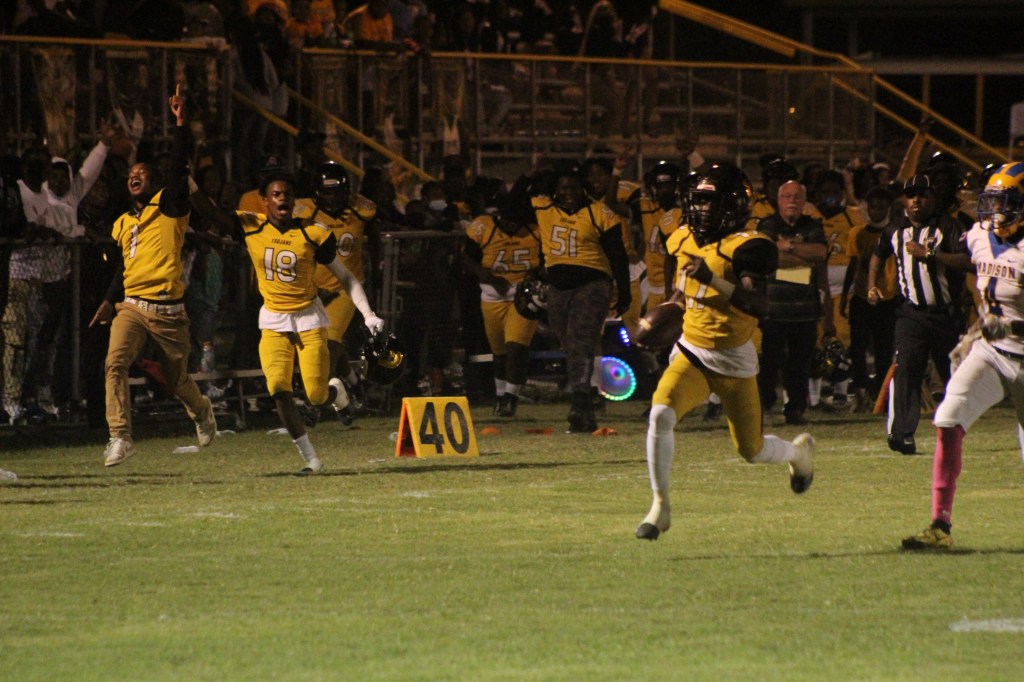 Ferriday running back Jaquarius Davis is a rushing threat for the Trojans. He said the game against Vidalia is like any other game, they have to work hard and be prepared. (Hunter Cloud | The Natchez Democrat)

VIDALIA, La. — The future of postseason athletics at Vidalia High School, Ferriday High School, Delta Charter School, and Monterey High School for the next two school years are currently at stake because of a strange rule from the Louisiana High School Athletic Association.

“There is a strange rule going on right now, but we’re appealing that,” Vidalia High School Principal Bernie Cooley said. “They’re trying to change some select and non-select (schools) around. Right now, they’ve got us designated as a select school, which is incorrect.”

Cooley said that regardless of the decision of the appeal, Vidalia and Ferriday will still be in District 2-2A with Mangham High School, Oak Grove High School (which is coming up from Class 1A), Beekman Charter School, Madison Parish High School, General Trass High School, and Rayville High School.

“The same teams that have been in our district with still be in our district. The only thing that would change is playoffs. It’s affected quite a few of them. All of the Alexandria schools. Most of the Baton Rouge schools. It probably affected 100 schools.

Cooley added that every school in its district is being affected by this unique rule and that when they’re done appealing this rule, they will all be back to normal.

“It hasn’t been officially set in stone. It has to do with select and non-select categories. We have 21 days to appeal this. It is a strange rule. It was kind of thrown on us at the last minute,” Ferriday girls’ basketball coach Lisa Abron said. “Right now, we’re awaiting the appeals process to go through. We’ll probably find out something at the end of this month.”

“They didn’t take a look exactly what our parish is. We feel like, hopefully, once we explain to them through the appeals process that we are. We are a non-select school district. Sometimes the way the LHSAA explains things makes you scratch your head.”

Abron noted that the rules has something to do with schools that are either charter school or magnet school programs.

“But it’s all in the wording. We’re trying to get out of it. It’s just a wait-and-see game right now,” she said. “We have to appeal it and state our case. They say we have open enrollment and we don’t. We’re going to appeal their decision. Hopefully, we’ll go back to our regular district and not have to compete with select schools that have open enrollment – charter schools, magnet schools, and private schools.”

Richard added that the LHSAA has changed is policy on determining select schools and non-selects schools. Vidalia, Ferriday, Monterey, and starting less than a decade ago after it opened up Delta Charter, have all been non-select schools since the split.

“They expanded their definition. At this point, I’m not sure why we fell under the select division. We’re going to appeal this decision,” Richard said. “Under the new rule, the biggest part of it is any parish that has open enrollment fall under select schools. We’re not clear on who they came to this conclusion. We have until June 21. Us, Ferriday and Vidalia don’t fall any of those categories.”

Efforts to reach Delta Charter head football coach Blake Wheeler last Friday morning and again on Monday morning to get his perspective on this unusual rule and how it could affect their school’s playoffs in Class 1A were unsuccessful.