‘At their mercy,’ Cooley reflects on mural controversy 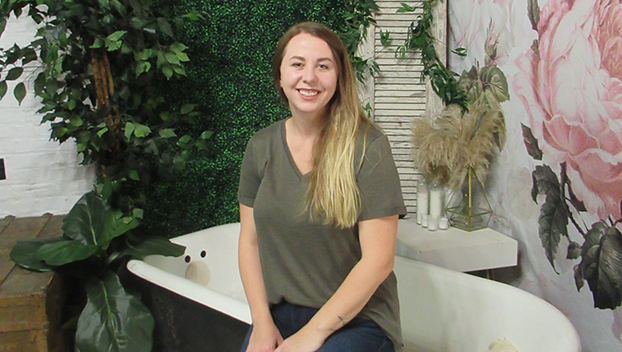 Taylor Cooley, inside her photography studio on Franklin Street. Cooley is working to install murals on her building in the Natchez historic building. (Maia Bronfman | The Natchez Democrat)

In the front room of Cooley & Co., near the eastern end of Franklin Street, Taylor Cooley sat in a folding chair with her youngest in her lap. Light from a window near the ceiling illuminated the white beams and grey-toned flooring that she and her husband had installed.

She wants to paint a mural on the other side of the wall which her back is turned to, but the city planning committee has tabled her proposal.

Other than the table and folding chairs propped against the wall, the space was empty. Because it’s an event venue, props and decorations need to cycle smoothly through the space.

She and her husband bought the building in March of 2021. At that time, it was owned by United Mississippi Bank and being used as storage for a church charity.

The building was constructed in the 1800s as a two-story, but a fire in 1907 caused so much damage that they could only restore the first level.

“We basically had to redo the entire building,” Cooley said. There were holes in the floor and ceiling. Because of uneven beam supports, the roof was also caving. The wiring was not up to code, potentially a fire hazard, so they had to redo all of the electrical work.

When they removed the boarding on some of the windows, they found water damage. Hidden costs abounded.

On the side of the building, one entrance was boarded up. “We had to get a permit to put in a door, even though any door is better than plywood,” Cooley said about her early experiences with the city bureaucracy.

When Cooley and her husband were painting the exterior, “they mapped a diagram adding light and dark greys for each piece of trim,” she said about further experiences with city planning officials.

“It was worth all the difficulty,” Cooley said about the intensive renovation process. Owning the building was also important to her, she thought it would give her more creative liberty with the property.

“As soon as we bought the building I started thinking about a mural,” Cooley said. She would commission Kate Lee Laird, a former coworker and friend who had already painted murals in three of her children’s bedrooms.

She was on a family moon, a honeymoon with her children, in Salt Lake City when she was initially inspired to think about public art, Cooley said.

“While we were there, we made a specific trip downtown to see the murals that they had there and to take pictures on the rainbow stairs,” she said.

Cooley remembers the murals she’d also visited in Austin and Nashville, how they attracted visitors and beautified the city.

“We don’t have anything like that in Natchez,” Cooley said.

Cooley joined a steering committee last year because one impediment to any mural proposal was a lack of formalized guidelines.

Working alongside former city planner Riccardo Giani and Ronnie Calhoun of the Miss-Lou Champion spotlight, among others, Cooley said the group proposed a draft.

“We were working really hard towards this and then it just stalled, it fizzled out. We couldn’t get anyone to push it any further” Cooley said. The plateau happened around the same time when Natchez had no city planner, after Giani moved away for a different job and before Frankie Legaux, the current city planner, was hired.

Around a month ago Kate Lee submitted her proposed murals to the planning committee to be reviewed at the public hearing on June 15. One said “Natchez I love you so much” in sunset-hued cursive. Next to it, blue vertical stripes were designed to prompt photos, Cooley said.

In the other mural proposal, a polaroid camera prints photos which display scenes from Natchez. The balloon festival, a horse carriage and the bridge over the river are all pictured.

Cooley said she might even add a #VisitNatchez label in the corner to increase social media traffic and visibility.

At the June 15 public hearing, her proposal was tabled by the Natchez city planning committee.

“Basically, we’re at their mercy,” Cooley said about the possibilities that their application might be approved, tabled or rejected in the future.

“We don’t have guidelines because they won’t approve the guidelines,” Cooley said. Guidelines are needed for the design application to be even considered.

“We will just continue to move forward, to reapply or change our design. Whatever we have to do to make it so that it complies with their guidelines, or what they’ll let happen,” Cooley said about her future plans.

“I think it’s really important to bring the public arts here. It would increase foot traffic. It would bring people here that wouldn’t normally come to this end of town,” she added.

People might be more likely to frequent the Natchez Olive Market across the street from her, or Steampunk Coffee Roasters and My Shoe Kloset in the same block.

“After they sent out the notice for the public hearing … I received a call from one of my neighbors, who owns C’est Jolie,” Cooley said. “I sent him the pictures and he said that we could tell them that we have his support, and that was a great thing.”

Ashley Ellis, a Natchez local, walked into Cooley & Co. while Cooley was sitting in the folding chair. Ellis was considering the location to host her parents’ 20th wedding anniversary celebration.