Juneteenth armed march goes off without a hitch in downtown Natchez 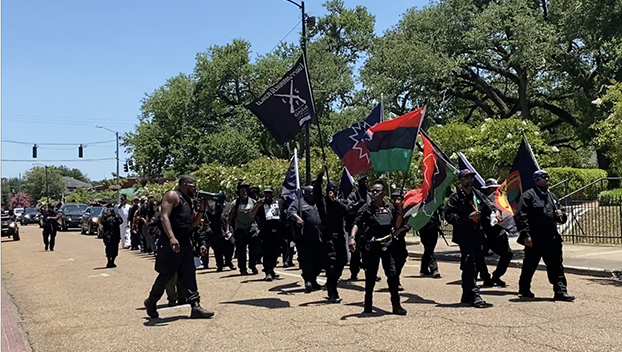 Members of the Elmer "Geronimo" Pratt Gun Club of Central Texas march through downtown Natchez, part of a Juneteenth commemoration organized by that group. (Jan Griffey | The Natchez Democrat)

About 75 people from Texas, Florida and other areas joined Nick Bezzel of the Elmer “Geronimo” Pratt Gun Club of Central Texas, who was in town for what was named the Gathering of the Great Armies.

The marchers met at the Natchez National Cemetery at about 10 a.m. where Ser Seshsh Ab Heter-Clifford M. Boxley spoke about the former enslaved people and U.S. Colored Troops who died in areas under the bluff in 1865, after Union forces arrived and took over Natchez.

The march was a grueling one. Marchers, most dressed in what looked like all-black military uniforms, carried multiple firearms, ammunition clips and many wore body cameras. The blazing sun, humidity and daunting heat – temperatures were over 90 degrees on Sunday – bore down on marchers all the way from Cemetery Road to Maple Street to New Street, to Oak Street to Dr. MLK, on down Main Street to Canal Street to the Proud to Take A Stand Monument at the Natchez City Auditorium.

Adams County Sheriff Travis Patten and Natchez Chief of Police Joseph Daughtry talked with and met Bezzel and other front men on several occasions prior to this weekend’s event.

“I talked with the leaders again before the march,” Patten said. “There were no incidents. Things really turned out good. There were no hitches. It went off pretty good.”

“I think it went well. They were well organized. We didn’t have any issues,” Daughtry said.

He said a couple of homeowners along the route were upset because they were inconvenienced.

“I want our citizens to know that local law enforcement were prepared. I have been in contact with Homeland Security and the FBI. We called on a lot of resources. We had this covered. We were prepared, and we were prepared because it is our job to keep Natchez and Adams County safe,” Daughtry said.

Patten said the group’s organizers complimented their interaction with law enforcement in Natchez.

“One of the comments they made was of all the places they have been, we treated them the best and they appreciated that. They came with one impression of law enforcement and how things are done in the South, but they are leaving with a different impression, a different perspective on how we do business here. I want to tell the citizens of Natchez that we do everything we can to keep them safe and to ensure Natchez is the beacon on the hill as we have been called to be,” Patten said.

Following the march, the gun club members were headed to Broadmoor Park at the end of County Club Road in Adams County for a family-oriented party, featuring vendors selling food, beverages and products, as well as activities for children, include a jumpy house and water slide.