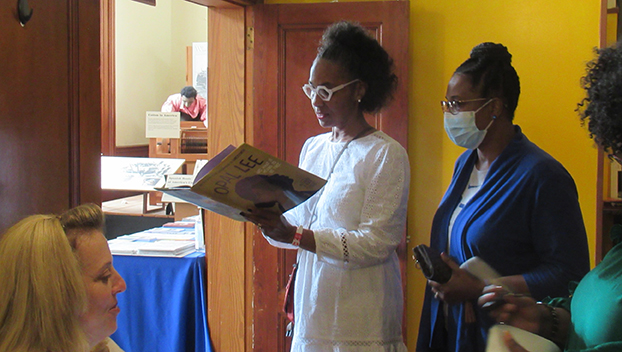 Alice Faye Duncan signing "Opal Lee and What it Means to be Free" for Sandra Barnes, VP of the Natchez campus for Copiah-Lincoln Community College. (Maia Bronfman | The Natchez Democrat)

“I believe that the dead talk.”

And Alice Faye Duncan believes she is the chosen vessel to tell their stories.

Duncan spoke at NAPAC as part of the week-long Soul Food Fusion Festival. About 30 people attended the event on Thursday evening.

Duncan, whose works include “Opal Lee and What it Means to be Free,” “Memphis, Martin and the Mountaintop” and “Evicted, the Struggle for the Right to Vote,” said she writes what she does because she grew up in Memphis, Tennessee, during the Civil Rights era. She said she was from the same neighborhood as the men in the sanitation strike in 1968 and the Black city councilman who helped end the strike.

The first photograph was in Money, Mississippi, after Emmet Till was lynched. “They said, ‘Black boy, we’re gonna let you in this court but we’re not gonna let you use your camera’,” Duncan said. “But he did.”

Withers took the photo of Moses Wright pointing at his cousin’s accused killer.

“Someone say zeitgeist,” said Duncan to the audience about Rosa Parks, the bus boycott and Martin Luther King Jr going to Montgomery, all in the wake of the trial.

When Duncan met Withers, she said he gave her a book about the tent city struggle in Fayette County, Tennessee.

“When I saw these farmers and all their sad-faced children, I said ‘what is this?’ He said ‘this is tent city.’ And I spent the next 15 years researching and writing that book,” Duncan said.

In 1960 sharecroppers in western Tennessee started the voting rights movement when they risked eviction to vote. They lived in tents until 1962, Duncan said.

“That inspired John Lewis to tell his college friends that they needed to do the same thing the sharecroppers did in Tennessee,” Duncan said. Then the Voting Rights Act was passed in 1964.

“Your schools still are not equally funded. They’re closing your public schools in the name of the charter. What are you going to do?” Duncan said to the audience.

Her poetic retelling was woven with prompts. She spoke about bravery, about action. From her book about “Opal Lee and What it Means to be Free,” she taught the five things for celebrating Juneteenth.

“Before we get to the barbecue, the music, the red Kool-Aid, we need to make it a time of reflection,” Duncan said.

“It is a time of music and praise, festival and fellowship, a time for listening to elders,” she added.

The last thing, Duncan said, is “Juneteenth is a unifier that represents freedom, and freedom is for everyone.”

“If there had not been Quakers on the underground railroad, Harriet Tubman would not have made it to Canada,” she said.

“It’s a fable about laughter, love, loss and the Mississippi Delta,” Duncan said.

It is also what brought Duncan to Natchez. She said she had wanted to meet Tate Taylor, founder of Film Natchez and owner of Crooked Letter Picture Company, to bring her book to the cinema.

“Evicted,” her book about tent city, she said also needed to be made into a film.

“Since he’s in the South he can do something really powerful and poignant,” Duncan said.

She has yet to meet Taylor, or formalize movie plans, but that curiosity led her to meet Betty Jo Harris, coordinator for the Natchez Literary and Cinema Celebration. Harris connected Duncan to Jarita Frazier-King, coordinator for Natchez’s Juneteenth celebration, who set up the talk.

Duncan will participate in the 2023 Natchez Literary and Cinema festival. The theme for the festival, to be held in February, is home and women.

More about Duncan, her personal history and literary works, can be found at alicefayeduncan.com.