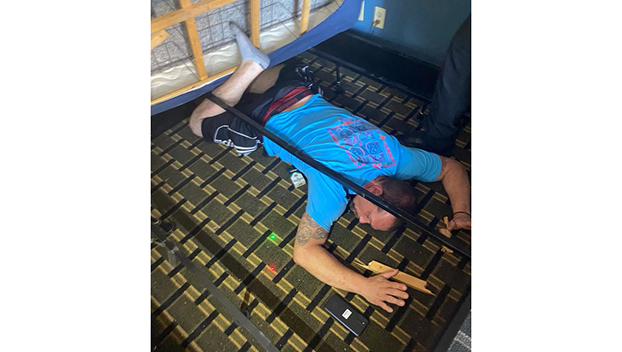 Submitted photo Mark Sturdivant, suspected of burglarizing a Natchez Church, is found by deputies hiding under a bed in the Red Carpet Inn on Friday.

NATCHEZ — A suspect in a June 7 church burglary was found hiding under a bed at the Red Carpet Inn in Natchez on Friday afternoon.

“He’d rather be crushed under the bed than go to jail,” Patten said.

Sturdivant was one of two sought for the burglary of the Washington Baptist Church, Old Highway 84 No. 1. Authorities identified him and Kevin Paul Martin on video camera footage entering the church and stealing three television sets from the church. Martin remains at large as of Monday evening. 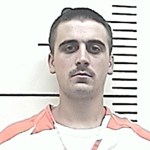 “We’re still actively searching for (Martin) and we’re asking for the public to contact us or Crime Stoppers,” Patten said.

Deputies located Sturdivant on Friday thanks to a tip from someone who saw him enter the hotel room, he added.

“After seeing him in the news, they saw him going into the hotel room and called us,” Patten said.

When officers searched the room, they found Sturdivant under the bed, lying belly down next to a pack of cigarettes and a cellphone, and arrested him.

He is detained by ACSO on a charge of church burglary and also has a warrant for a parole violation with the Mississippi Department of Corrections, Patten said.

ACSO is asking anyone with knowledge of Martin’s whereabouts to please call the Adams County Sheriff’s Office or Crime Stoppers at 888-442-5001.