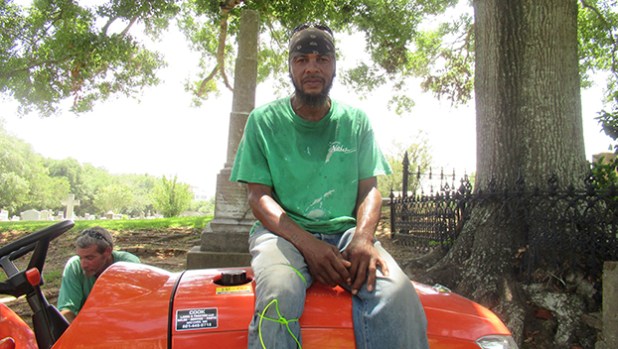 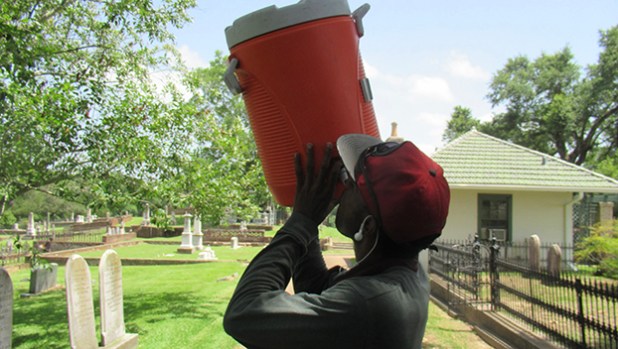 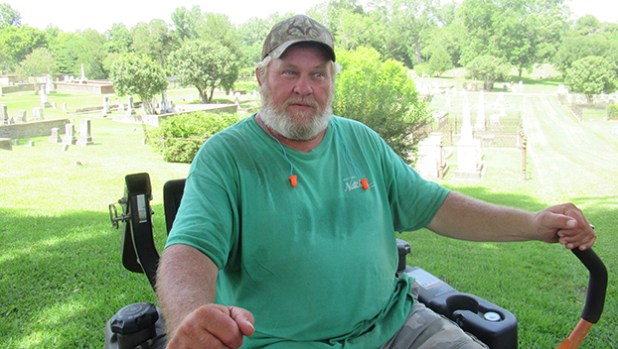 NATCHEZ — “When you start one side the other side grows,” said Willie Davis. Being ahead of schedule actually puts you behind schedule, he explained.

There are 110 acres of grass at the historic Natchez City Cemetery that need to be cut, and eight people on the team.

Much of Mississippi and North Louisiana is under a heat advisory and has been for the past few weeks.

The cemetery landscaping team, made up of riders and walkers, has grown accustomed to working under intense heat. Last week, Dale Collier, a rider, sat in the shade on a Tiger Cat II. He showed his farmer’s tan and lamented the humidity.

In the ’90s, there were 17 guys and less acreage, but they had push mowers, Collier said. There are fewer guys now but more horsepower.

One hundred yards away, the walkers rested around a tractor-trailer.

Davis sat on the edge of the trailer, his sunglasses pushed up over the bandana wrapped around his forehead. Nylon string and a carton of propane sat in the bed of the trailer with their weed eaters.

Davis sipped from a Gatorade bottle and Jeremy Green drank from the cooler.

“Straight to the source,” Green said.

“When I go home I look straight,” Green moved his hands like he was directing traffic. “I don’t wanna see no grass, no lawns,” he said.

Davis and Green agree on cold showers after work, especially as temperatures hike in the summer.

“You just get used to it,” Davis said.

Green remembered the sole time he took a hot shower after work.

“I was so dizzy I couldn’t breathe,” he said. Now it’s cold showers, water from the cooler, and fans.

Their break from landscaping the cemetery wasn’t timed. Instead, it relied on Dimitri Cosey’s internal clock.

“He waited until he was old to be a workaholic,” Bryan Butler said. After about five minutes, Cosey put out his half-smoked cigarette on a hubcap. He put the cigarette back in his pocket and picked up a weed eater.

Green put his earbuds back in and followed Cosey. Green said he’s listening to Afro music to help him learn Nigerian.

Butler stayed for a moment on top of the tractor attached to the trailer. Sweat dripped from his beard.

“You just get used to it,” Butler said about the heat. He’s been cutting grass in the cemetery since he was 19. He’s 46 now.

He kept pulling on the knot of a string trimmer tied around his knee, meant to remedy the pain from a wreck he was in eight years ago. The more tension, the better it works, he said.

Eventually, Butler climbed down from the tractor and Davis got off his perch.

Davis started singing about the task, about them doing it together. He was eventually cut off by the drone of their weed eaters.

“They work hard,” said Mark Fortenbery, a former Alderman for the City of Natchez and current cemetery director, as he watched the riders and the walkers. The backpack leaf blower he was wearing made him look like a ghostbuster.

“Politics,” Fortenbery said about moving on from his old post.