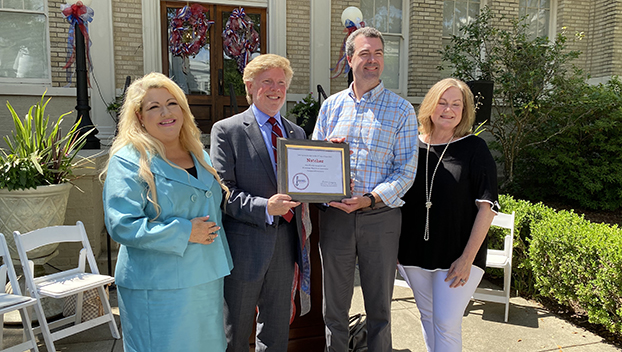 NATCHEZ — Natchez is again a member of the Mississippi Main Street Association.

Natchez Mayor Dan Gibson introduced Thomas Gregory, executive director of Mississippi Main Street Association, to a small group gathered in the sweltering heat outside the front of City Hall Tuesday afternoon. Most sought protection from the broiling sun on the sidewalk under the shade of the decades-old oak trees.

The event was brief, and after introductions, the group moved across the street to the air-conditioned Council Chambers for refreshments and relief.

“Thank you for coming out in this heat for a very exciting occasion in Natchez,” Gibson said.

“A lot has been happening in Natchez and we are so excited because of the continued Natchez Renewal. We are also excited because as we look back in our history, Natchez is continuing to live up to our reputation as the great shining city on the river’s highest hill,” he said.

Gibson explained that in 2016, a group of city officials and others, including the Friends of the Riverfront, launched a significant program to develop a long-term master plan for Natchez. He credited Chesney Doyle, who was a driving force behind Friends of the Riverfront, in making the long-term master plan for downtown happen.

“We are here today in June 2022 to celebrate so much progress. That master plan is going to guide our city forward in many ways. Part of that plan was the establishment of a downtown Natchez association and bringing on a director for downtown,” he said.

Gibson said re-establishing membership in the Mississippi Main Street Association was also a part of the long-term plan.

“We are here to celebrate the fact that so much has been done and we are now at this place to receive our designation,” he said.

Doyle, president of the board of the Downtown Natchez Alliance, introduced Diane DuPont, the new director of that organization.

Doyle thanked Gibson, who she said is the “hardest working mayor in America.”

“It may seem like a long and winding road, but actually we have been methodically following the plan. So many have worked so hard to bring us to this pivotal moment in Natchez,” Doyle said.

DuPont earned her Bachelor of Arts degree in mass communications and marketing with a minor in corporate communications from the College of Charleston. Her career experience includes fundraising, political campaign management, event planning and real estate development, Doyle said.

DuPont is an employee of the Downtown Natchez Alliance, which is funded through private contributions and annual city support. Doyle declined to disclose DuPont’s salary.

The DNA board received 21 applicants for its director position. The agency advertised for candidates regionally and nationally, Doyle said.

“Her skill set, her confidence in her abilities and her references were outstanding,” she said. “Diane has experience in many of the areas that we were looking for. She had the most relevant experience of all of the professionals who applied, and we had some very good applicants.

“For our board, we felt the stars aligned when we saw Diane’s application,” Doyle said. “Then, in the interview, she definitely displayed the seasoned professional experience and leadership qualities we were seeking.”

At her introduction to the community on Tuesday afternoon, DuPont said she is excited about her new position in Natchez.

“These are such exciting times here in Natchez. There is the feel of positive change, progression and excitement in the air. We need to capitalize on this wave of momentum that has been handed to us and let us take it as far as it will go,” DuPont said. “Most importantly, we need to positively improve the quality of life for those who reside here. Also, we need to support our local businesses by lifting them up and offering helping hands.”

DuPont moved to Natchez in January.