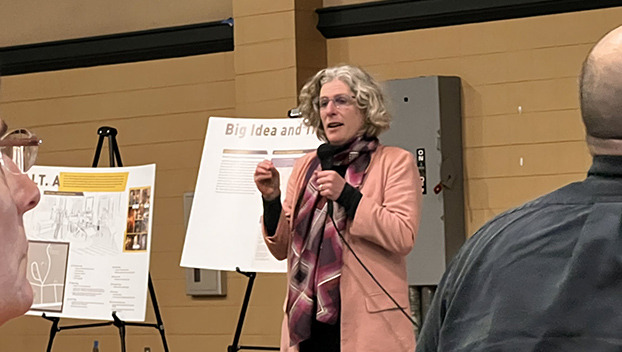 NATCHEZ — The Mississippi Department of Archives and History Director Katie Blount approached the Natchez Adams School District Board of Trustees on Tuesday with a proposal to grant the school district $50,000 to fund a master plan for the old Washington community school building near historic Jefferson College.

This master plan would provide them with an assessment of the building’s condition, priorities for its restoration and suggest uses for it, Blount said.

“This is not a competitive grant program and it would not require a match,” Blount said. “These are special grants that we reserve for emergencies in Mississippi landmark buildings and buildings of special interest or importance to the Mississippi Department of Archives and History.”

MDAH is interested in the Washington school for multiple reasons, she said.

Secondly, Blount said MDAH has a special interest in the abandoned school building because of its location adjacent to Jefferson College, “because it is an Archives and History site that we have big plans for.”

MDAH recently held a press conference at the Grand Village of the Natchez Indians to announce that the Mississippi legislature provided $8 million in state funding for two Natchez projects. One is to build a museum at the Grand Village and the other is to restore the historic buildings on the Jefferson College campus, “for use as an interpretive center for the broad history of the Natchez region and its national significance,” Blount said.

A focus of the interpretive center’s topics would be the enslavement of African Americans to build a cotton empire that shaped much of the South, she said.

MDAH’s other plan for the campus is to house a preservation field school where students would be taught historic preservation skills that are “in great demand in the marketplace” such as brickwork and window restoration, Blount said.

This would be done in partnership with preservation programs at Mississippi State University, Tulane University and possibly others, she said. Blount added MDAH could also be a partner with the school district to offer the programs to high school students.

“We’re very interested in exploring shared uses between the preservation trade school and the school district,” Blount said. “There are functions of the trade school that could be housed better in the Washington school building than in the existing buildings at Jefferson College. I know there is a wonderful auditorium in the building and we’d be very interested in exploring that in this master plan and learning what the school district’s plans are for the building.”

If the school district commits to the preservation and use of the school, it would also be eligible for MDAH’s annual competitive grant program that requires a match of 20 percent of the total project cost, Blount said.

The school board took Blount’s proposal under advisement without acting on it.