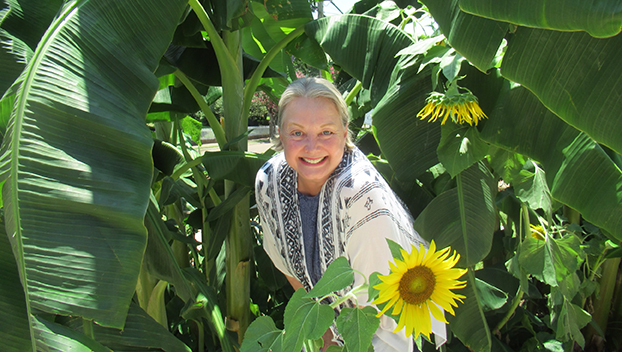 NATCHEZ — Natchez has a Catmandu where birds flock to feeders hung from banana trees. Between the banana trunks, sunflowers have sprung from seeds spread by the birds.

She said the sunflowers sprouted in the spring.

“All of a sudden, they just took,” Michelle said.

She figured the seeds were dispersed from her bird feeder by sparrows, finches, cardinals, pigeons, doves, blackbirds and a squirrel from The Elms that comes every morning via powerline.

She knows when the birds come because they sing. Her cats, the home’s namesake, watch from the window.

“There’s no rhyme or reason,” Michelle said about her garden, “I just plant.”

Her family has been, without rhyme or reason, planting in Mississippi and Louisiana since the late 1800s. On a grant from the British Crown, her great-grandfather moved to a farm in Athens, Louisiana, from Windsor, U.K., after a career as Queen Victoria’s personal bodyguard.

Michelle’s grandmother kept a garden on her family’s 40-acre farm near Monroe, Louisiana. They lived five miles outside of town, and people would drive out on Sunday afternoons to look at her flowers.

There was no Home Depot or Lowe’s to buy seeds or buds.

“Everything she had, she had acquired or people had given her,” Michelle said.

And what she had acquired, she gave to others. Crinum lilies, which Michelle said came from her grandmother’s garden, now grow at Catmandu. She got them when she lived in Nashville, Tennessee, and took them with her when she moved to Asheville, North Carolina, and Covington, Louisiana.

When she and John moved to Natchez, they had to temporarily stay in an apartment before their house was ready.

“I dragged the lilies down in pots and put them on the patio,” she said about the apartment gardening arrangement.

All six of her grandmother’s daughters, called “the sisters,” also grow lilies they got from the garden in Monroe. Michelle has shared them with neighbors and friends, and the people who move into the homes she and John have moved out of.

The inside of her house is filled with plants her sons, Eric and Ivan, have given her.

“The most wonderful plants I have were given to me,” she said. Michelle also said she’s been asking her sons to stop giving her house plants because the upkeep for all of them has become very time-consuming.

Next to Michelle’s row of banana trees and sunflowers, her front gate is woven with Natchez blackberries and roses.

When she was originally planting her garden, she said her son knew she wanted roses. He called her one day when he found some on sale for a dollar at Walmart. It was raining that day when she picked them up.

“We were having the best time,” Michelle said about finding the roses in a rainstorm.

The Natchez blackberries, she said, are popular among people walking by her house.

John once asked Michelle who he was.