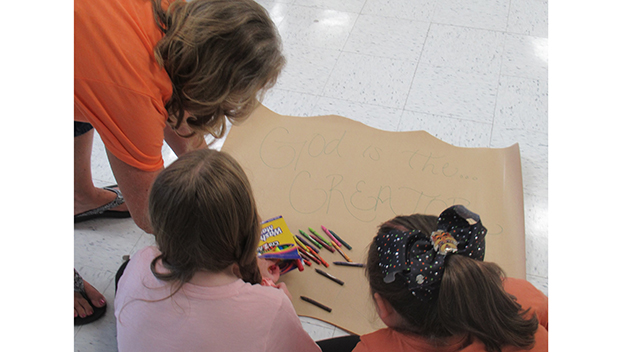 NATCHEZ — The kindergarten class at Parkway Baptist’s vacation bible school were instructed to put on their crowns each time their teacher read “God,” “King” or David” from Psalms 104.

Their crowns were paper plates which they’d decorated with pom-poms and stickers. The lesson in scripture and attentiveness was also one in God’s creativity, said Charlotte Britt, a volunteer. Britt was wearing a crown with mini flashing lights.

“If they say the verse they get to wear it,” she explained.

The main verse for the VBS is Ephesians 2:10. “It’s about the oceans, sky and animals, how creative God is,” Marty Kennedy, program director for this year, said about their theme. “It’s important to share the gospel with kids,” she added.

In the first and second grade class, Kolby Kennedy read Acts 13:21-23. He asked the students what God created.

“Sun,” said Savannah Pace. Three others said earth, one said “all the planets like mars, venus…”

When Kolby said that the challenge for the end of the week was to memorize the main verse, three proved they already could recite it perfectly. Kolby promised them treats.

After the lesson, they drew God’s creations onto large pieces of paper. They worked in groups of two to four. “It’s a giraffe coming out of a tree,” said Pace. There was no head yet, but she promised she would draw that next.

Rajesh Behara, Associate Pastor for Education, in another classroom showed a video of a missionary family in Guatemala. “A beautiful example of God’s creativity,” the narrator said to introduce Guatemala, “with forests, volcanos and farms full of bananas and coffee.”

“You’ve seen God’s creation now use your imagination,” Behara said to his class. He then gave the students bags and labels and instructions to decorate them.

“Design something creative with your imagination and tools,” He said.

“The activity will reinforce that God is designing you,” he added.

After the students design their bags and fill them with tools, like crayons, they will distribute them to other kids in the community.