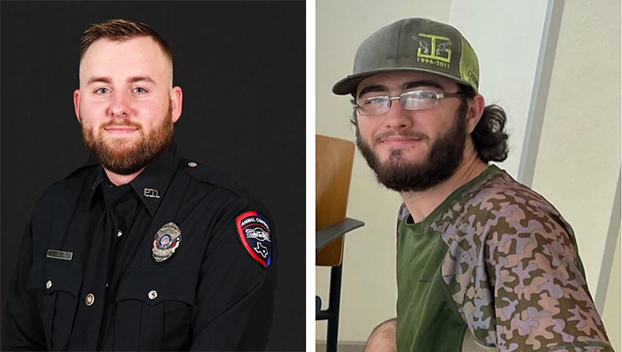 Jonathon Taylor Coco, left, and Hunter Coco, right, are both Vidalia, Louisiana, natives who lost their lives in the line of duty as volunteer firefighters in Maxwell, Texas. (Submitted photos)

VIDALIA, La. —  On Friday, the lives of two Texas volunteer firefighters — brothers and Vidalia, Louisiana, natives — will be remembered during a graveside service at Bougere Baptist Church in Vidalia.

Hunter Coco, 21, and his brother Jonathon “Taylor” Coco, 25, were both volunteers with Maxwell Community Volunteer Fire Department in Maxwell, Texas, and died in the line of duty.

Their grandmother, Dorothy Coco, who lives in Vidalia, said the brothers were living in San Marcos, Texas. However, they spent the first part of their lives from birth until first and third grade with her in Vidalia.

“They were my babies,” Dorothy said.

She expressed pride in both of them through her grief at losing them too soon.

The brothers were returning from a wildfire they had just put out when their lives were cut short by a traffic accident on Texas Highway 20 outside of Lockhart around 1:48 p.m., Monday, June 20. The broken hearts they left behind extend well beyond their biological family.

In a televised interview, Samantha Lucas, a fellow firefighter, told FOX News that losing them was like losing family members.

“He (Taylor) made every person he came in contact with feel like he was their best friend. That’s the way it was for me as well,” Lucas states.

Taylor joined the Maxwell Community Volunteer Fire Department in 2016 and was the assistant chief. His younger brother Hunter followed in his footsteps and joined the volunteer fire service just over a year ago. Hunter was engaged and would have been married Saturday to Allyssa Ashby. They have a 14-month-old daughter, Paisley.

“Taylor was always very outgoing and full of laughter,” their sister Ashley Sanford said. “He loved to make everyone else laugh. He loved to cook. It was his love language to everyone. And Hunter was quiet but once he warmed up to you, he was a goofball like the rest of us.”

Sanford said she has “so many memories” with her brothers that she would cherish, such as the memory of Taylor coming to visit her family in Vidalia last Christmas. It was the first Christmas they celebrated together in years.

Hunter was going through the fire academy to become a certified firefighter and lacking only a few classes until his graduation, said his dad, Barry Coco.

He was posthumously awarded his certification and black helmet so that he received full honors at a memorial service last weekend.

“They start with yellow helmets and you got to earn the black one,” Barry said.

Barry and his wife Jaimee now live in Martindale, Texas. Barry said he was once a firefighter in Vidalia where he grew up and his sons wanted to follow in his footsteps.

Fire units from across the State of Texas and Louisiana led a procession to the memorial service in Lockhart, Texas.

“It was a full, honorable firefighter’s service,” Sanford said. “It was beautiful.”

Flags at the National Fallen Firefighters Memorial located in Emmitsburg, Maryland, were also raised to half mass in their honor.

In his downtime, Hunter enjoyed hunting, fishing and building things.

Hunter and Taylor’s mother, Jaimee Coco, said they could both take anything apart and put it back together, be it a computer or a car.

“Hunter was constantly working on this truck he has out in the barn.”

Hunter bought the truck cheap and replaced parts of it piece by piece, she said.
“It was in pieces strewn across the barn,” Jaimee said. “He was always in the dirt.”

Mostly, Hunter enjoyed being a father.

“He was a good father to Paisley and she was his pride and joy,” Sanford said.

Taylor wore a lot of different hats, from volunteer firefighter and animal control officer to IT guy, Sanford said.

“Taylor enjoyed doing anything and everything,” she said. “He spent most of his time at the police department and fire department. When he wasn’t there, he would be visiting us. He loved his nieces and nephews.”

Barry said Taylor was a “nerdy child” who grew up to be a prominent leader.

“He was looked up to not just by his brothers and sister but the whole community,” he said.

Hunter was good at following orders and Taylor had a take-charge attitude whether it was in the field or in the kitchen, Jaimee said.

“Get out of my kitchen. That’s what he would tell me,” she said.

Barry and Jaimee said it was amazing to see how many lives their sons had reached during the services.

“I was told there were over 100 fire apparatus there and I don’t know how many police cars. They had Jonathon’s animal control truck as well,” Barry said. “The show of support from everyone was just amazing.”

Jaimee added she saw many people she didn’t know whose lives and property were saved by her sons. She saw a family carrying a giant American flag for them that recently had a house fire.

“To see so many people who saw them as heroes but to me, they were just my boys,” she said.

A GoFundMe page has been created by the fire department to assist the families of Taylor and Hunter called “Firefighter Coco Brother’s Memorial Fund.” As of Monday, the page generated just under $5,000 in donations.

The family asked those who want to give in any other way to support their firefighters, perhaps by donating water, Gatorade or a meal to show them they are appreciated.

“Every time they respond, whether they are at a fire or accident or traveling to and from the scene, they’re in service to the community and their lives are on the line,” Barry said.

Donations in support of Taylor and Hunter can also be made to Maxwell Community Volunteer Fire Department, P.O. Box 216, Maxwell, Texas 78656.