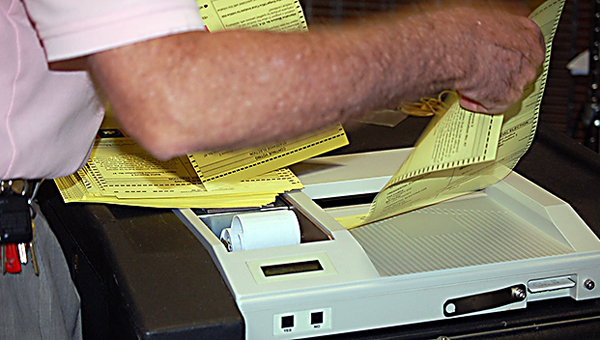 Absentee ballots are run through a machine which counts the votes. (File photo | The Natchez Democrat)

Flowers received a whopping 292 votes in Adams County, or 65.91%, to Eller’s 150 votes, or 33.86%. The total number of ballots cast represents 2.36% of all 18,916 registered voters in the county—keeping in mind that anyone who voted Democrat in the June 7 primary could not vote Republican during Tuesday’s runoff election. Only registered voters who voted Republican or not at all on June 7 were able to vote in the runoff.

While the turnout was much lower, both Flowers and Eller gained slightly more votes from the county than they had on June 7.

On Tuesday, there were no hiccups, surprises or power outages, as there had been at one Adams County precinct during the primary.

At 9 p.m., it appears as though Flowers may face incumbent United States Representative Bennie Thompson in the Nov. 8 general election.  Statewide, Flowers leads with 58% of the votes to Eller’s 42%.

Other runoffs were held in Districts 3 and 4.

In District 3, incumbent Congressman Michael Guest leads with 67% of the votes to Michael Cassidy’s 33%. In District 4, Mike Ezell won the Republican nomination for U.S. House in Mississippi’s 4th Congressional District, beating incumbent Steven Palazzo with 54% of the votes.