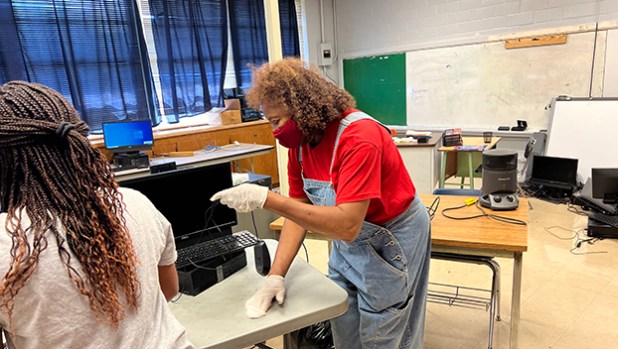 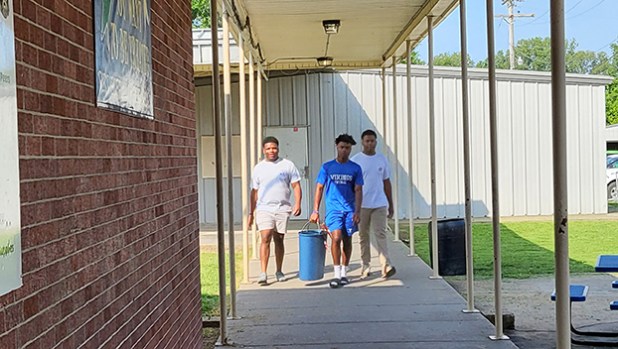 Vidalia High School football players help out with cleanup at Vidalia Junior High School after the school was broken into and vandalized last month. The Concordia Parish School board is now considering the possibility of revamping all its schools, perhaps building new schools. (File photo) 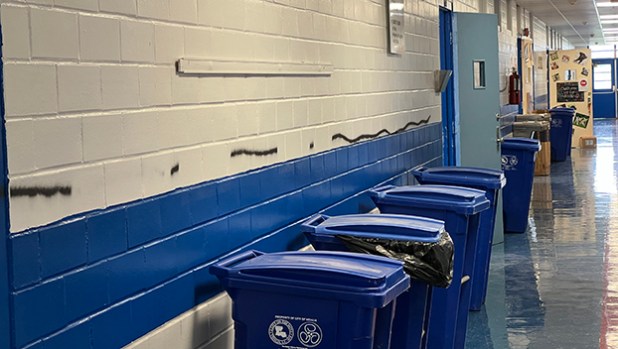 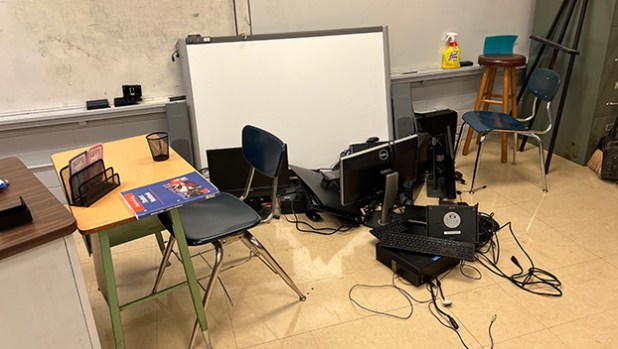 VIDALIA, La. — A trio of juveniles are facing criminal charges for what could be more than $200,000 worth of vandalism at Vidalia Junior High School over the weekend.

The vandalism – which ranged from spray-painted hallways to damaged projectors and computers to ransacked classrooms – took place on Saturday.

Vidalia Police Chief Joey Merrill the three juveniles were caught on camera Saturday breaking into the building and removing items. They face charges of burglary and vandalism, but he said he could not release other details because of the ongoing investigation and their juvenile status. All three are under the age of 12, officials said.

On Tuesday morning, faculty members, students and other volunteers were on hand to help begin the cleanup.

“Not just one school is helping, all schools are helping,” school district superintendent Toyua Watson Bachus said, adding she feels confident that everything that was lost can and will be replaced.

Bachus said in a phone interview Tuesday morning that she had to end her honeymoon early and was on her way home to help with the situation.

“We’re trying to get it in shape for the school to open on time,” said school board member Raymond Riley, who chairs the district’s building and grounds committee. “They were small kids, so they did more messing up than damage.”

Damage estimates could reportedly reach $200,000 or more. Riley said the full extent of the damage is still being assessed.

“They ripped smartboards off of the wall and spray painted the hallways,” he said, adding insurance adjusters have yet to provide an assessment. Many of the teachers’ personal belongings also were damaged or missing.

Things appeared to have been strewn all over the floor of each classroom and desks had been overturned. In at least one classroom, it appeared as though a hammer had been used to smash up a smartboard screen.

“It’s a really bad mess,” Riley said. “We’re going to get an estimation and get an allotment to each teacher to replace what they lost.”

As for any action that the school district would take against the perpetrators, he said the destruction had been caused by two 10-year-olds and an 11-year-old. He declined to give further information because they are juveniles.

“There is only so much we can do but we will take whatever action we can,” he said. “We will have security measures in place that are better than what we have. Security is one of our top priorities at our next board meeting. … We’ll be discussing upgrades to alarm systems and cameras at all of our schools, not just Vidalia Junior High.”

Vidalia Junior High Principal Christine Washington said the program was nearing its end and the final classes would be held at Vidalia High School on Thursday.