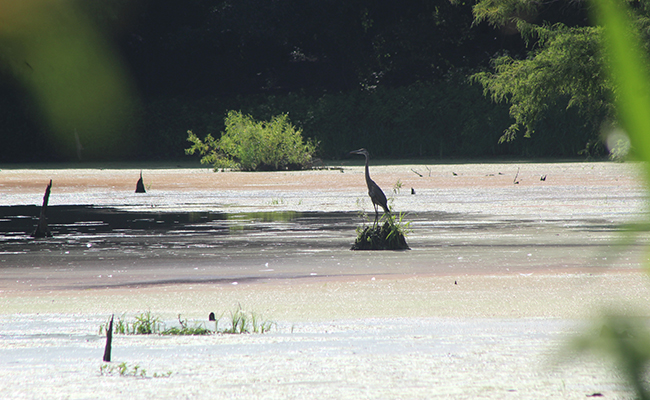 A blue heron perches on a rock in the middle of a swamp at St. Catherine’s Creek National Wildlife Refuge. This swamp can be found by taking the Magnolia Trail and is on the southern section of the trail. (Hunter Cloud The Natchez Democrat)

She said water covered the road past the central ditch to Gillard Lake, so it isn’t open all the way. Kreisler said she anticipates it being dry this weekend for visitors to reach Gilliard Lake.

River Road, off of Carthage Road, was blown out by flood waters. She said the county must make repairs to the road first.

While they have not been able to repair Butler Lake’s low water boat launch, the high water boat launch is open. She said visitors are taking advantage of the proximity to Salt Lake and Lake Lucille. Roads are open, but they are not dried out all the way just yet.

In the swamp, people can park at the edge of the impoundments and walk down the levees to fish in different pools of water. All summer long, they can fish from these levees.

Last year, the river dropped by July 4th weekend but rose again shortly after and drained again in August. Kreisler said she believes the river will stay down this year because the river has been on a steady decline. The river gauges at Cairo and Memphis do not show an influx in their river stages. It would take a grand release of water from tributaries up north to cause the river to flood the refuge again.

It would present a challenge in keeping water in the impoundments for the migratory birds. Wading birds such as cranes, storks, egrets, and killdeer begin to arrive in late July and early August.

Kreisler said they have not been able to access the ATV trails close to the river in the Sibley Unit yet. She does not expect there to be too much damage to the trails. Last year, they had a lot of silt build up on the roads and damage from woody debris.

“The river brings a lot of woody debris, and if it falls out quickly, it can scrape away the road. We would then have to smooth it out, but this year it has fallen slowly and is not tearing up the roads as badly,” Kreisler said. “In previous years, the silt has been bad, but this year, it was not. We think this is because the Mississippi River did not reach as high of a flood level, or maybe the trees are doing their job.”

St. Catherine Creek’s signs were not as fortunate. She said they would have to clear mud off the new signs around the refuge and pick up any knocked down.

Bayou Cocodrie National Wildlife Refuge, under Kreisler’s care, has dried out faster than St. Catherine Creek. She said there are still some low spots deep in the woods where it is a little boggy.