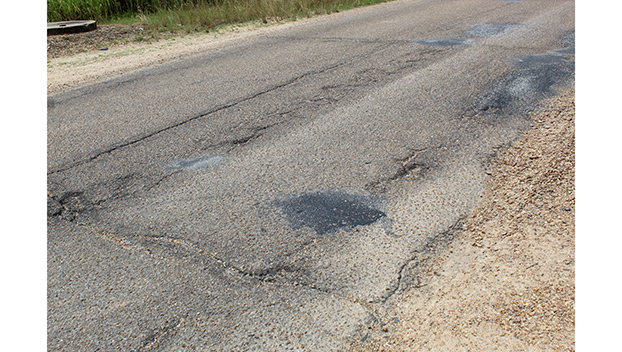 NATCHEZ — Adams County District 4 Supervisor Ricky Gray said during Tuesday’s board meeting that he was tired of people “playing games” with the county when it comes to the Morgantown Road resurfacing project.

Decades after officials said they would widen and resurface the road, no ground has yet been broken.

“I was elected in 2016 and this started way before I got here,” Gray said. “To be honest with you, I really don’t like what I’m seeing. On every level, people are playing games with Morgantown and I don’t like it.”

Gray added at times it seems like someone—not the county—is “sabotaging” the project.

Morgantown Road, considered by some to be the most dangerous road in the county, is highly traveled and prone to frequent flooding and potholes.

In trying to get the road resurfaced, the county had dealt with multiple bumps in the road themselves, Gray said. Money for the project had previously been approved by the state. However, as the county spent years procuring easements along the edge of citizens’ property in order to widen the road, the funds were spent elsewhere. The project also had to be redesigned, taking out a lane so that it would take up less property on either side.

County Attorney Scott Slover said officials had just approved a payment to JKS and he would exchange the check for the plans that IMS needs.

Once they have those plans, Gray said the county had to have all of the money to complete the project in hand before it can begin. While $2.4 million has been earmarked for the project by the U.S. Congress, another $2 million or more will have to come from another source.

Officials said use tax funds could be used to pay the debt service on a $7.5 million loan for infrastructure that could include Morgantown Road. Using some of the $5.9 million issued to the county from the federal American Rescue Plan Act is another option, Gray said.

In other matters during Tuesday’s meeting, officials discussed a letter received from the Mississippi Department of Environmental Quality which states that the dam underneath Robins Lake Road is non-compliant and the county has until Oct. 31 to get it corrected.

Officials said when the dam was repaired, the pipe used to drain the water did not meet MEDQ’s standards would have to be replaced. Brant Jones of JKS said JKS is looking at absorbing the cost to replace the pipe, which is approximately $150,000.