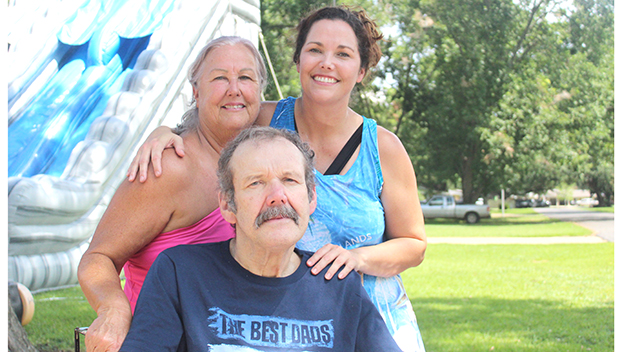 Vietnam War Veteran Jimmy Higgins was outside of his home on Robert Gray Street in Vidalia close to where The Dart landed Thursday Afternoon. Behind him to the left is his wife of 50 years Pam Higgins, and to the right, is his daughter Miranda Thibodeaux. (Hunter Cloud | The Natchez Democrat)

VIDALIA — Miranda Thibodeaux wheeled her father Jimmy Higgins in front of his home on Robert Gray Street close to where The Dart landed Thursday afternoon. A towering gray water slide covered the front lawn as his nine grandchildren ran between the pool to the water slides.

He also said times were tough growing up. His parents divorced and his mom broke her leg, so he had to take a job in ninth grade to support the family.

“I didn’t go to college because I had to work and my momma got sick. It was a tough battle,” Higgins said. “I got through by the grace of God.”

Instead of going to college, Higgins joined the service and fought in Vietnam with the U.S. Army. The Army gave up an education and he earned his GED. When he returned home from the war, he started working in the grocery business.

He said he worked at Piggly Wiggly, Kay’s Groceries and The Markets. Higgins said he spent about 20 years with The Markets and Harley Loy before working at Kaye’s Groceries for 21 years.

In 2018, he retired from the grocery store business after working as a manager for many years.

“It was a living. I made good money and I liked working with people,” Higgins said. “I miss the customers the most. I miss Mr. Loy.”

His favorite job is entertaining the grandkids and the neighborhood kids. Pam and Jimmy Higgins have nine grandchildren and three children and have been married for 50 years. One of their children lives in Lake Charles, one lives in Jackson and the other lives in Vidalia.

An avid hunter, he has traveled all over the United States to experience the outdoors. Pam said they would go as a family to Colorado to ski and Jimmy would go out in the woods hunting. In all of his travels, he chose to stay in Vidalia.

“It’s a good place to live,” he said. “I don’t like high traffic and I saw this place. It is slower paced.”

Like a cowboy from a western, Higgins has one serious mustache and he gets trimmed up every so often. Pam said he has had a mustache for as long as they have been married. His daughter Miranda said she doesn’t think she has ever seen him without one.

His favorite part of the day is visiting with old friends from the grocery business or his nurses who come by to visit him. Higgins said he has Parkinson’s and he believes exposure to Agent Orange, a herbicide used by the U.S. military in the Vietnam War, is the cause of it.

While he does not like to talk about his time in the war, he does have an appreciation for Fourth of July and America.

“I have a lot of respect for the Fourth of July because I served,” Higgins said. “Any way you can give respect to your country and neighbor, do so.”